Years in the making, the American Capital (NASDAQ: ACAS) spinoff plan is finally here. In a 200+ page proxy filing with the SEC, the company shed more light into what it will look like when it splits its asset management company from its investment assets.

Admittedly, this is a dense document, as many SEC filings are. But there are several things that I think investors would be wise to pay attention to. Here's what's on my radar.

In the last six months, the asset manager would have earned $31 million in pre-tax operating income. That's a pretty good baseline for its profitability, given the company isn't paying cash taxes. You can also add back in the $10 million of severance costs, which are one-time in nature, which gets to you $41 million in pre-tax operating income. It works out to about $0.145 per fully diluted American Capital share in last six months.

It'll probably end up better than that. Notably, it assumes that the business development company (BDC) will operate with low leverage, thus generating a very low return on equity, and lower management fees as a result. As the BDC ramps up, management fees will ramp, too. Other income and capital gains from assets retained on the asset manager's balance sheet will create additional, but likely volatile, income.

2. The BDC fee structure
American Capital's spinoff is financial engineering at its best, or worst, depending on how you look at it. Ultimately, the success of the asset manager relies on its ability to siphon fees off the BDC.

American Capital found reasonable balance here. The BDC will pay the asset manager fees of 1.75% on assets each year, plus 20% of returns in excess of 8% per year.

It's my opinion that because American Capital shareholders will own the BDC and the asset manager, a lower fee is better. Lower fees will reduce the profits of the asset manager, but provide for bigger dividends from the BDC. Naturally, the bigger the BDC's dividend, the better its potential to raise more capital on which the manager can collect a fee. You can read more about this on page 37 of the filing.

3. Cashing in employee stock options
Shareholders know that American Capital insiders are paid handsomely, primarily through large stock option grants. Many of these options will be worthless after the spin off, since shares of American Capital as it exists today will plunge when the assets it owns are pushed into the BDC it spins out.

Insiders are exercising their options as quickly as they can before the spinoff. To offset the dilutive impact, American Capital has been buying back stock. Most recently, it announced that it repurchased 9.7 million shares.

In the proxy, American Capital is asking shareholders for the right to issue stock under net asset value so that it can submit a tender offer to buy back employee stock options that are in the money. Under this plan, employees would be subject to a 180-day lockup.

Normally, I'd oppose any effort to sell shares under NAV or book value because it destroys shareholder wealth. But it appears that this will have a minimal economic impact on shareholders. Either insiders dump new shares into the open market and American Capital buys them back, or, with shareholder approval, it skips the open market part of the equation and simply transacts directly with insiders at the market price. This isn't a big deal, as I see it.

4. But speaking of options...
It wouldn't be American Capital if it didn't have a plan to pay insiders richly. Investors might want to take a look at page 51, which provides details on the 2016 Equity Inventive Plan that is up for vote.

5. The reverse split
The Board of Directors wants you to approve a reverse split before the spinoff. That makes sense. When you break a $12 stock into two companies, you end up with tiny share prices.

The ratio isn't filled in, but based on the share counts in the pro forma income statement for the asset manager, I suspect it'll be a 1-for-3 reverse split. Economically, it doesn't matter. Fewer shares or more shares, the value of the total business doesn't change.

6. The BDC's balance sheet and income statement
The BDC will be named American Capital Income, and trade under the ticker "ACAP" on the NASDAQ. On page 12 (the second page 12, not the first one) you'll find a pro forma for the BDC.

Like the pro forma for the asset manager, it assumes light leverage (debt of $1.75 billion vs. assets of $5.8 billion) because it's based on the assets and liabilities as of June 30, 2015. In the first six months of 2015, the BDC would have earned an operating return on equity of about 6% annualized.

The asset mix, based on assets that will be transferred to the company at the time of the spin off, is expected to look something like the chart below. 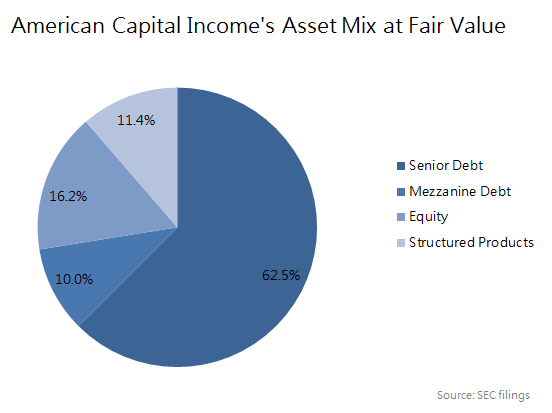 More than half the assets at cost will be the company's recently acquired first-lien loans. This isn't the old American Capital, which invested heavily in equity and light on lower-risk debt. If anything, it's reversed, banking heavily on lower risk senior floating rate loans to drive returns.

Some quick calculations can help us figure out the size of the BDC relative to American Capital as it exists right now. Using the BDC's equity of $4.083 billion, and the fully diluted share count of 283.2 million shares, I arrive at a net asset value of $14.42 per American Capital share.

Subject to change
Everything is subject to change at any moment. It was just a few months ago that American Capital planned to spin off two smaller BDCs rather than one, before changing the plan to include only one big BDC.

Until all the blanks are filled in, there's only so much to make of it. But give the proxy a read -- or at least a solid skim -- and check out some of the pages I've noted above. This is a transformational move for American Capital that has been in the making for years. Thirty minutes spent on the proxy will leave you with a much better understanding of what's to come.