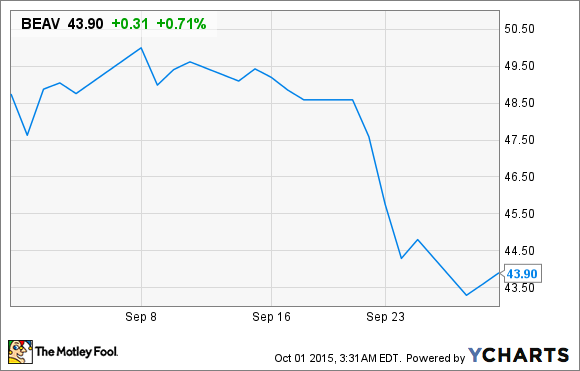 B/E Aerospace (NASDAQ:BEAV), a designer, manufacturer and retailer of interior cabin products for commercial aircraft and business jets, took a hit in September, falling 10% based on data from S&P Capital IQ.

There appear to be two primary catalysts weighing on B/E Aerospace stock. First, the company announced on Sept. 16 that it would be recognizing an after-tax charge of approximately $30 million in the upcoming third quarter related to its closure of a handful of production facilities, the consolidation of select product lines, and the elimination of roughly 450 jobs.

The move is being made to reduce costs in 2015 and 2016 with top-line growth slowing down, but it's set to result in weaker third-quarter GAAP earnings. B/E Aerospace continues to forecast revenue growth of 1% to 2% in 2016, although it plans to provide more detailed guidance on Oct. 27, 2015, when it reports its Q3 results.

The other factor at work here is that weaker global oil prices have hurt demand for new aircraft, and therefore the parts found inside those aircraft. With fuel prices down substantially from where they were a year ago, airlines don't have the same urgency to upgrade their fleet to more fuel-efficient planes. Countries like Russia, which are dependent on oil revenue for economic growth, have also seen orders slow, adversely impacting B/E Aerospace's business.

What investors should be asking here is whether this modest weakness in B/E Aerospace's stock is a buying opportunity or a warning flag to keep your distance. Personally, I believe the company is worth a closer look here.

B/E Aerospace's woes at present appear temporary as it adjusts to the rapid shock created from the more than 50% plunge in crude prices. I anticipate that once B/E Aerospace has readjusted its supply chain and reduced its costs, crude prices stabilize worldwide, and global airlines realize the long-term value in updating their fleet to take advantage of fuel savings and additional capacity, the company's top and bottom lines will realize meaningful expansion.

A quick look at B/E Aerospace's backlog and rough growth prospects reaffirms its solid long-term outlook. It ended Q2 2015 with a booked backlog of $3.2 billing, including $760 million in bookings during the quarter, an 18% year-over-year increase. Including contracts awarded that aren't officially booked yet, B/E Aerospace appears to have more than two full years of revenue waiting in the wings. In fact, the company's Q2 earnings press release said that "we continue to expect a strong reacceleration in the 2017 revenue growth rate."

With its EPS forecast to grow from just the $2.51 it reported in 2014 to more than $4 in 2018 according to Wall Street, I believe B/E Aerospace is inexpensive enough to be considered an intriguing long-term buy.