What: Shares of Northern Tier Energy (NYSE: NTI) declined 11% during the month of September. While most of that decline can be attributed to the general malaise of the broader, as well as energy, markets, the announcement that its Minnesota refinery was undergoing some unplanned maintenance came as an unpleasant surprise to investors.

So What: Pretty much the entire broader market was working against shares of Northern Tier this past month, so anything that wasn't spectacular news was likely to hit the company particularly hard.  So when the company announced that it would be forced to shut down its refinery for unscheduled maintenance, the market took the news pretty hard. 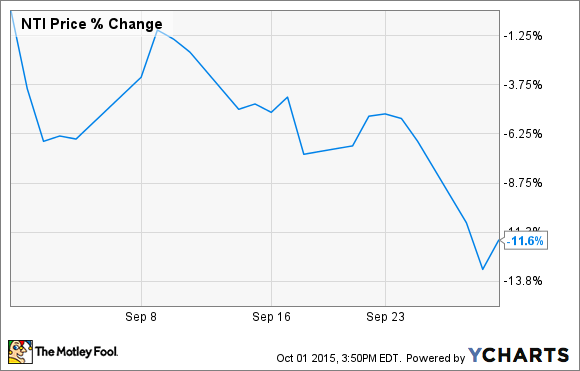 There are two reasons that this is a big deal for Northern Tier in comparison to other refinery companies. The first one is that Northern Tier only operates one refinery, so any downtime can lead to a large impact on both revenue and earnings. The moment the unplanned maintenance was announced, Northern Tier estimated that it could impact the refinery's daily average crude throughput by as much as 5% for the quarter.

The second reason this had an impact on the company's stock price is that Northern Tier operates as a variable rate distribution partnership. This means that 100% of distributable cash gets paid out to investors: no more, no less. This helps the business over the long term because it never has to pay out more in distributions than it can afford in any given quarter -- a very necessary trait when so much of the cash flow comes from one asset.

Now What: In all honesty, this is one of the small risks that an investor faces when investing in Northern Tier, but it certainly isn't one that should prevent someone from investing in it or not. As long as these unplanned maintenance outages don't happen frequently, and the company can continue to leverage its advantageous location to source cheap crude, Northern Tier should be able to churn out generous distribution payments.