This quarter's great earnings results highlight why Northern Tier Energy LP (NYSE: NTI) is one of my favorite refiners. That's why I am so disappointed at Western Refining's (NYSE: WNR) buyout offer. Find out what makes Northern Tier such an attractive acquisition candidate, but more importantly what the buyout means for long-term investors of both companies.

That spectacular result was fueled by low oil prices increasing the refiner's gross margin 32% year over year to $24.97 per barrel excluding a one-time, non-cash charge. That is substantially more than many of Northern Tier's competitors, a result of using cheaper Western Canadian Select crude for some of its inputs.

A 39% increase in the 6-3-2-1 crack spread, which applies to 95% of Northern Tier's production, and benchmarks against West Texas Intermediate oil, also helped boost profitability to record highs, despite an unplanned shutdown of one of the refiner's units in September. 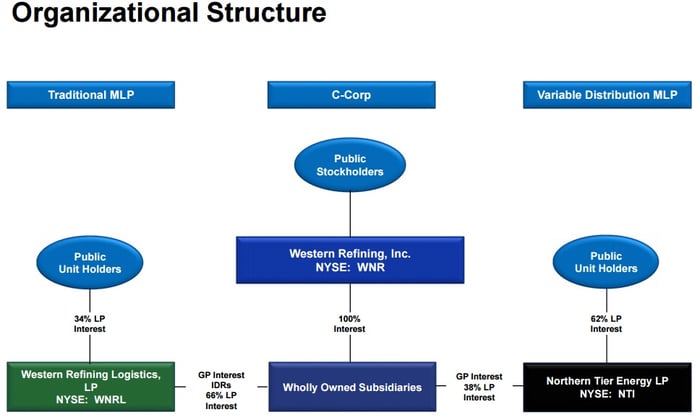 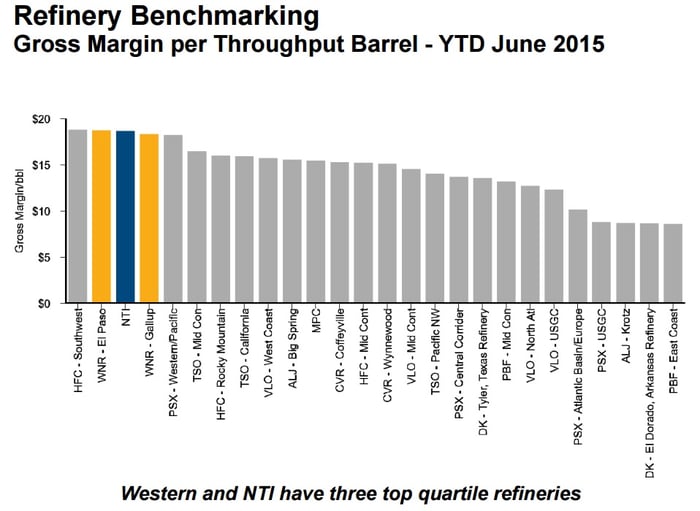 Since Northern Tier Energy is 62% owned by the public it means that a large portion of the distributions it pays out aren't going to Western Refining. By acquiring all remaining LP units Western Refining can redirect that cash flow benefiting its own investors. That's especially true since 33%, and 27% of Western Refinings' current capital allocation budget is going toward dividends, and share buybacks, respectively.

One of those tax benefits is the ability to "step up" or reset the value of Northern Tier's assets to the price Western Refining is paying. This means that under an accelerated depreciation schedule it will be able to lower its tax bill, and thus increase the amount of cash available for dividend growth, and buybacks.

What the buyout means for investors
Western Refining is offering $17.50 per unit in cash plus 0.2266 shares of Western Refining per NTI unit. This total buyout price of $27.62 per unit represents a 15% premium to Northern Tier's-20 day average price as of Oct. 23.

There are two reasons I'm not so keen on this offer. First, I believe it greatly undervalues Northern Tier's exceptional long-term income generating capacity. After all, Northern Tier unit holders are receiving a small premium in exchange for trading a 14.6% forward yield for Western Refining's much smaller 3.1% yielding dividend.

Granted, this payout is still 50% larger than the S&P 500's yield of 2.1%. In addition analysts expect Western Refining to grow its dividend by 13.4% CAGR over the next five years, and the benefits of this buyout could certainly help the company achieve such payout growth.

However, income investors initially attracted to Northern Tier Energy for its sky-high payout potential, and competitive advantages over other refiners may not be too happy trading immense current income for possible future dividend growth. That's especially true given that as long as oil prices stay low, Northern Tier Energy is likely to generate very strong refining margins, and pay out highly attractive distributions.

Then there is the tax factor. One of the benefits of owning MLPs is that they have certain tax advantages. This proposed deal is 63% cash, and will leave Northern Tier investors having to pay Uncle Sam for potentially several years of deferred taxes. That tax bill could be more than the premium Western Refining is offering for Northern Tier's units.

While Northern Tier Energy has yet to respond to the offer, given that 38% of its units are owned by Western Refining, I think the likelihood that the deal will be accepted is very high. For the same reason, barring a complete revolt by existing unit holders, there is probably little chance that investors will vote down the deal should Northern Tier management decide to accept it.

Bottom line: Western Refining investors are getting the better end of of this deal
I don't blame Western Refining for wanting to buyout Northern Tier Energy. After all, it's in the best interests of their shareholders. However, high-yield investors who were attracted to Northern Tier because of its industry-leading profitability, and incredible income-generating potential should be disappointed at the undervaluation the buyout offer represents. Worse yet is that the repercussions being forced on long-term Northern Tier unit holders could potentially wipe out the entire premium they are receiving.