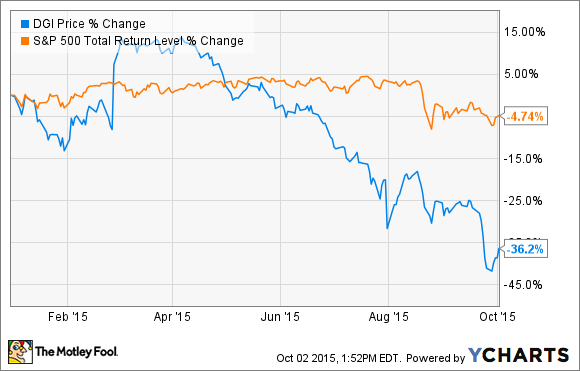 So what: Shares had already drifted around 7% lower in the three weeks leading up to the downgrade -- a move which seemed at least partly an extension of negative investor sentiment after management warned during DigitalGlobe's second-quarter report of "somewhat moderated" revenue growth in the second half of the year. But when JP Morgan stepped out last week and downgraded DigitalGlobe from overweight to neutral, lowering its per-share price target from $30 to $27 in the process, it only accelerated the decline.

Now what: However, even JP Morgan's freshly reduced view represents a fairly attractive premium with DigitalGlobe stock now sitting below $20 per share. And as I pointed out in my full earnings take shortly after its quarterly release, note DigitalGlobe easily exceeded analysts' expectations on both revenue and earnings in Q2, including a surprise bottom-line gain of $0.09 per share when Wall Street was anticipating a $0.02-per-share loss.

As for investors' concerns looking forward, keep in mind the company reiterated its previous full-year guidance for 2015 revenue of $725 million to $750 million, adjusted EBITDA of $355 million to $375 million, and capital expenditures of $110 million. And, yes, that reiteration was disappointing in the context of DigitalGlobe's Q2 outperformance. But CEO Jeffrey Tarr later explained this was the result of lower anticipated sales of its highest-quality 30cm imagery from the new WorldView-3 satellite to location-based services customers.

"Based on our first few months in the market with our 30cm imagery," Tarr stated, "we've decided not to undermine our value proposition to customers in other verticals by selling our best imagery at too-low a price to a segment that would make this unique offering freely available on the web."

Make no mistake: This was a strategic decision made with DigitalGlobe's long-term success in mind. And while it may negatively affect sales in the near term, I still think investors should applaud DigitalGlobe management for their prudence.