For the past couple of years, iconic Japanese gadget maker Sony (NYSE:SONY) has attempted to put its differentiation stake in the smartphone ground by betting big on waterproof smartphones. This has been a big marketing push for Sony's Xperia Z lineup, resulting in marketing images like this one: 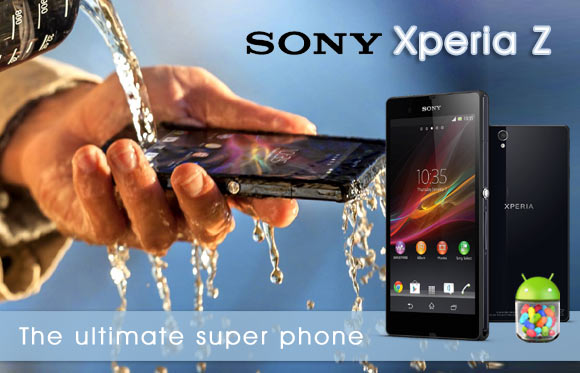 For those times you accidentally pour an entire bottle of water directly onto your smartphone. Image source: Sony.

Samsung characteristically followed Sony down this waterproof path. As always, the South Korean conglomerate likes to emulate rivals in every imaginable way as a hedge in case they're on to something. The Galaxy S4 Active was Samsung's answer to Sony's Xperia Z. Unfortunately for Sony, the strategy hasn't worked as its smartphone market share remains in the low single digits while its smartphone segment lost billions of dollars last year.

Sony CEO Kazuo Hirai has openly expressed a willingness to exit the smartphone market, but Sony's mobile chief has reiterated the company's commitment to smartphones. It's not clear what will happen here. Worse yet, it turns out that Sony's waterproof smartphones aren't actually all that waterproof.

Sony: Don't use your waterproof phones in water
Last month, Sony quietly updated its support page and explicitly warns users not to use their waterproof phones underwater, as first spotted by Xperia Blog. Sony describes the conditions under which it tests its phones, as well as the international standard IP ratings that are used. Sony also reminds users: "Remember not to use the device underwater."

Don't do this with your Sony phone. Source: Xperia Blog.

Apple: One more thing...
It turns out that Apple's (NASDAQ:AAPL) newest iPhone 6s and 6s Plus are remarkably water-resistant. For a company that loves to brag about its latest accomplishments, the Mac maker surprisingly said nothing of this new functionality when it unveiled the new devices last month. That's not to say that the iPhone 6s is completely waterproof, but there have been numerous videos of users completely submerging their new iPhones in water.

The new iPhones sustain extended exposure in shallow water without any problems, although deeper water causes issues due to increased water pressure. Still, I would have expected Apple to tout the new devices as "the most water resistant iPhones we've ever made."

iFixit also discovered a new adhesive surrounding the front panel that serves as a gasket, and the entire iPhone's frame has been tweaked to accommodate this gasket. Apple even added silicon seals on the logic board's cord connectors, a method that it patented recently.

Why so quiet?
Apple's quiet inclusion of stronger water resistance is smart for a couple of reasons. While Sony's desperation to differentiate and grow its smartphone business led it to exploring waterproofing, its aggressive marketing overpromised. On the flip side, by not highlighting water resistance, Apple is underpromising and users are being pleasantly surprised.

Sony is essentially asking users to submerge their phones, but the risk is that the pricey device fails and now Sony is on the hook for warranty coverage. By not focusing on this new feature, Apple is minimizing its risk exposure to users who might otherwise intentionally dunk their phones.

On top of that, Apple has already been exploring waterproofing technologies in recent years, in part due to Apple Watch. Since high levels of water resistance are already widely expected in traditional watches, Apple knew that it had to incorporate water resistance into Apple Watch (which has a rating of IPX7). As it explores water resistance, it might as well add it to the iPhone. It's also possible that Apple is saving its marketing muster for the iPhone 7, which is already rumored to be fully waterproof.