Please ensure Javascript is enabled for purposes of website accessibility
Free Article Join Over 1 Million Premium Members And Get More In-Depth Stock Guidance and Research
By Jeremy Bowman - Oct 3, 2015 at 7:20AM

The shoe retailer has hit a multi-year low, but it could be a good buying opportunity.

What: Shares of footwear retailer DSW ( DBI -3.66% ) got kicked down a notch last month, falling 14%, according to data from S&P Capital IQ. As you can see from the chart below, most of the slide came toward the end of the month as a combination of a retail sell-off and an analyst downgrade sunk the stock. 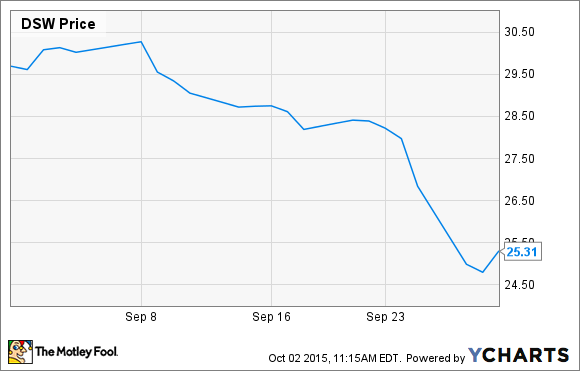 So what: Shares of DSW had traded relatively flat for most of the month, but then fell 4% on Sept. 25, the day fellow footwear retailer Finish Line crashed 20% on underwhelming same-store sales figures and weak growth in its men's department. Though Finish Line specializes in athletic gear, and DSW is more of an all-purpose retailer, the worry seems to have carried over to DSW.

The following session, shares fell another 6%, as the stock was downgraded by B. Riley from buy to neutral. The research firm lowered its price target from $38 to $31, but no further information was available.

Now what: Following the slide, DSW shares are trading at a 52-week low. Though the cause of last month's sell-off was not significant, it's reflective of an underlying weakness in the stock, as its P/E ratio has fallen to just 13, a cheap price for a growing company.

The retailer has opened nearly a dozen stores in the last month alone as its comps improved a modest 1.8% in its most recent quarter, down from 5% in the first quarter. More importantly, earnings per share jumped 13.5%, as gross profit increased 120 basis points due to fewer markdowns, a move that may have reduced comparable-sales growth, but grew profits.

With shares now as low as they've been since early 2012, the stock seems to be at a good entry point. It offers a dividend yield of 3.2%, and its unique low-cost model should help fuel its expansion, and give it an advantage over competing shoe retailers and online platforms. With solid expected earnings growth ahead of it, I'd expect the stock to bounce back.