Neha Chamaria, Alex Dumortier, CFA, and Tyler Crowe
(TMFNehams)
Author Bio
A Fool since 2011, Neha has a keen interest in materials, industrials, and mining sectors. Her favorite pastime: Digging into 10Qs and 10Ks to pull out important information about a company and its operations that an investor may otherwise not know. Other days, you may find her decoding the big moves in stocks that catch her eye. Check back at Fool.com for her articles, or follow her on Twitter. Follow @nehamschamaria
Follow @nehamschamaria

Investors in metal mining stocks have little to be excited about. Miners have seen their revenue and profits fall off a cliff as commodity prices continue to head lower, compelling many to delay or shelve big projects as they struggle to rein in costs in these challenging times. Investors, meanwhile, have watched in horror as mining stocks took a tumble.

While it's impossible to say when commodity prices will reach their trough, some companies in the metals mining space have proven their mettle even in the downturn. We asked three of our contributors to pick their favorite turnaround play in the mining sector, and they've come up with some interesting names.

Tyler Crowe: BHP Billiton (NYSE:BHP) hasn't seen its shares decline as much as some of the others in the mining space, but there's a reason for that. BHP is a more well-managed company, and in a better position to manage the commodity slide and succeed when the market starts to recover.

One thing that has been a staple issue during this downturn in commodity prices has been too much leverage. Those companies with too much debt have become beholden to their banking masters rather than their shareholders, and have had to make some undesirable moves, like cut dividends.

BHP isn't one of those companies. Of the four global mining giants, BHP has maintained the most conservative balance sheet: 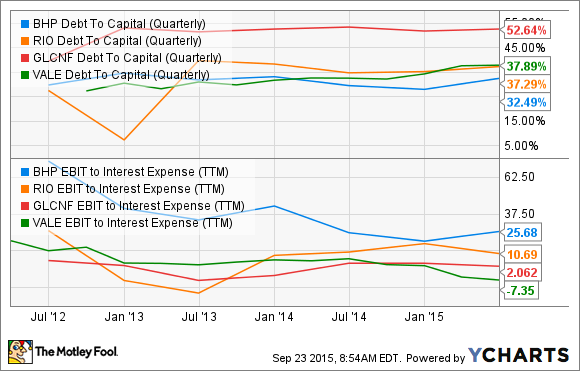 What has really helped BHP on this end is that, even though earnings and cash coming in the door has declined ever since the top of the commodities cycle in 2011, BHP's management has followed suit by finishing up several projects and bringing its capital expenditures in line with today's market. Even at today's prices, BHP is bringing in enough cash from operations to fund both its expenditures and its $6.9 billion in dividends to shareholders.

The other thing that makes this conservative approach that much more attractive is that it has the financial wiggle room to make an acquisition or two from distressed companies in the space if it so desires. With Chinese demand still slowing, a glut of new mines coming online, and other global demand centers unable to pick up the slack, there is a very real possibility that we haven't seen the end of this downturn. Knowing this, it's not a bad idea to take a more conservative approach to investing in the mining sector, and there are few mining companies out there as conservative as BHP.

Neha Chamaria: Silver Wheaton (NYSE:WPM) isn't really a miner. But as the world's largest precious metals streaming company, its fortunes are closely tied to the prices of silver and gold, both of which have been hammered during the past year. However, Silver Wheaton doesn't feel the pinch of a downturn as much as miners do, thanks to its unconventional business model.

Silver Wheaton enters into "streaming agreements" with miners, whereby it finances them up front in exchange for the right to buy a certain amount of the metals produced from the financed mines at a low, fixed price. In other words, Silver Wheaton secures bullion streams from miners without incurring any of the costs associated with exploration, operation, and maintenance of mines. Given that the company's purchase cost averages only about $4 per ounce of silver and $400 per ounce of gold, it can generate huge margins even in low-growth conditions: So while the downside risk appears limited, there's great upside potential. Silver Wheaton's agreement partners include big names like Vale, Goldcorp, and Barrick Gold. As precious metals bottom, miners may scramble to secure quick finances to restart mines and kick-start delayed projects to meet the pent-up demand. While that should give Silver Wheaton's business a nice push, recovery in metal prices should boost the company's margins further, as it can sell the low-cost metal that it buys from miners at higher prices.

Given its unique business model, I wouldn't be surprised to see Silver Wheaton shares rebound faster than those of mining companies when the cycle turns. I believe that having shed nearly 42% year to date, this interesting mining play offers great value for long-term investors today. With management also initiating a buyback program for 5% of the company's outstanding shares to take advantage of the recent slide in its share price, investors should be able to find greater confidence in Silver Wheaton's growth prospects going forward.

Alex Dumortier: What a difference the end of a commodities supercycle can make. In May 2011, Swiss miner-trader Glencore plc (OTC:GLNCY) was being feted for completing London's largest ever initial public offering, with a market capitalization of $59.2 billion. It was the first company to be added to the FTSE 100 index on its listing in a quarter of a century.

Although it was claimed the issue was more than four times oversubscribed, the underwriters, led by Citigroup, Morgan Stanley, and Credit Suisse, were forced to intervene in the last five minutes of the first day in order to support the stock price -- the shares closed at the IPO offering price of 5.30 pounds. With hindsight, that now seems like a bad omen.

Less than five years on, the shares have lost three-quarters of their value. In a sector that's already struggling, Glencore shares have managed to produce a massive bogey over the past 12 months -- the orange line represents the iShares MSCI Global Metals & Mining Producers ETF: 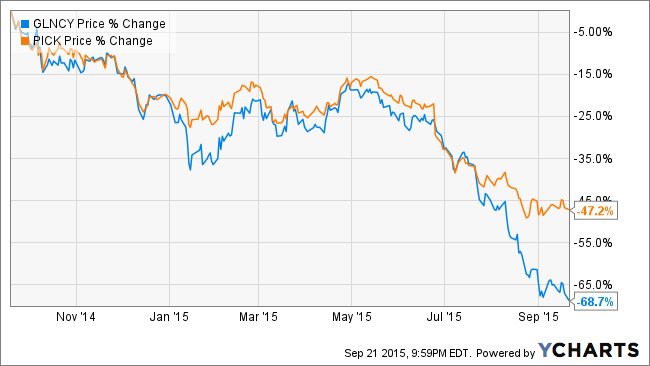 Last week, Glencore completed a $2.5 billion equity raising, part of a $10 billion package to reduce debt and protect its credit rating, which is vital to its trading operation. Oh, and by the way, the measures also include eliminating the company's next two dividends.

At this point, you're probably wondering why anyone who is sane and aware of all this would still be interested in buying the stock. If you're a value investor, you don't buy a company's shares when the price reflects nothing less than unfettered global domination. Right now, the sentiment surrounding Glencore is absolutely awful, and there's a good chance that the share price has now overshot to the downside. At little more than five times next year's earnings-per-share estimate of 0.23 pounds, the shares are statistically cheap (admittedly, forward earnings estimates are subject to significant uncertainty.)

Glencore's senior management appear to believe this is the case, as they are "eating their own cooking." CEO Ivan Glasenberg, who owns 8.3% of the company, purchased $211 million worth of shares in the equity offering in order to maintain his ownership stake. The company's heads of copper and zinc went in for $161 million combined.

In fact, no one has a stronger incentive to bring the share price back up than Glencore's executive management, who were already among the company's top shareholders. (Given Glencore's leverage, I don't see management "stealing" the company out from under minority investors by partnering with a buyout firm to take it private, a la Dell.)

And for Glasenberg, there is an even stronger motivation: ego. According to the Financial Times:

People who know Mr Glasenberg say he is not motivated solely by money. He drives a Toyota Prius to Glencore's offices from the small village on the shore of Lake Zurich where he lives with his schoolteacher wife. What motivates him, these people say, is a fierce competitive spirit and a hunger to win.

Finally, I was also encouraged to see that value investors Harris Associates, Glencore's fourth-largest shareholder, also participated in the offering; I don't think they'd throw good money after bad if that is what they thought it was.

Glencore is an aggressive, highly contrarian pick, but investors with a certain risk tolerance may want to investigate it further.