Apple's fourth-quarter earnings gets a date. Here's what investors need to know. 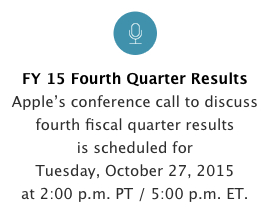 Brace yourself. It's earnings season. Fortunately, this usually means very little for portfolio turnover -- at least for Foolish investors with their unusually long time horizons. But even if long-term investors don't plan on buying and selling amid the mostly irrational volatility, earnings season is always a good time to check in on the companies investors have in their portfolio. One such company many investors will be checking in on this month is Apple ( AAPL -0.32% ), which the just announced that it's reporting its fiscal 2015 fourth-quarter results on Tuesday, Oct. 27. Here's what investors should keep an eye on when the company reports earnings.

Expectations
Heading into the announcement, analyst expectations are optimistic. On average, analysts expect Apple to report revenue and EPS of $51 billion and $1.88, respectively. These figures represent 21% and 32% year-over-year growth for EPS and revenue from the year-ago quarter.

iPhone sales
As always, one key metric to watch will be iPhone sales.

How many iPhones could Apple have reasonably sold during the quarter? One clue on iPhone sales potential is Apple's revenue guidance for Q4 (provided in Apple's third-quarter report) for a 19% year-over-year increase; considering iPhone sales usually represent the majority Apple's reported revenue growth, it's reasonable to believe iPhone unit sales could increase around 15% from the year-ago quarter during Q4. This would put Apple's fourth-quarter iPhone unit sales at about 45 million -- not bad for a quarter with nearly one-year-old iPhone models and only about a week of limited availability of the new iPhone 6s and 6s Plus.

Gross profit margin
One of the interesting metrics to watch in recent quarters has been Apple's gross profit margin. Benefiting from the company's continued pricing power and soaring iPhone sales, Apple has consistently been posting positive year-over-year comparisons on this important profitability metric. 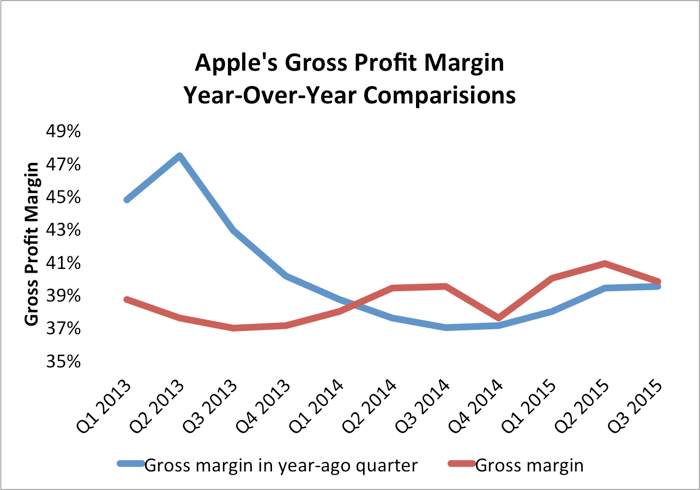 Revenue guidance
Considering Q1 is seasonally Apple's biggest quarter for iPhone sales every year, benefiting from both the first full quarter of availability of the tech giant's newest models and the holiday season, investors will be looking closely at the company's reported guidance.

And two items this year specifically serve to heighten the interest in guidance to be provided during Q4 for first quarter revenue.

Second, Apple has a new product this holiday quarter: the Apple Watch. With supply in full swing and some recent key updates to the watch, including the introduction of gold and rose gold colors for the Apple Watch Sport line, will the new product help Apple's revenue comparisons? Or will its share of revenue be too small to notice?

Check in on Apple's fourth-quarter earnings after market close on Oct. 27 and tune in to the company's live earnings call at 5 p.m. ET.