For the most part, the media seems to grasp the key features of electric-car maker Tesla Motors' (NASDAQ:TSLA) new Model X -- at least all features except for one critical element: price. Most media outlets are still asserting the Model X will start at $132,000. But this figure is off by quite a bit.

Getting Model X pricing right
When Tesla first unveiled Model X pricing by giving some reservation holders access to an online configurator, the listed $132,000 sticker price for the SUV was a shocker for some. But for anyone familiar with how Tesla prices their vehicles, it was about in line with expectations.

Beyond the Signature P90D Model X, Tesla has already announced it will sell a 90D Model X, which will allow owners to choose fewer options and, importantly, opt out of an expensive Performance upgrade. 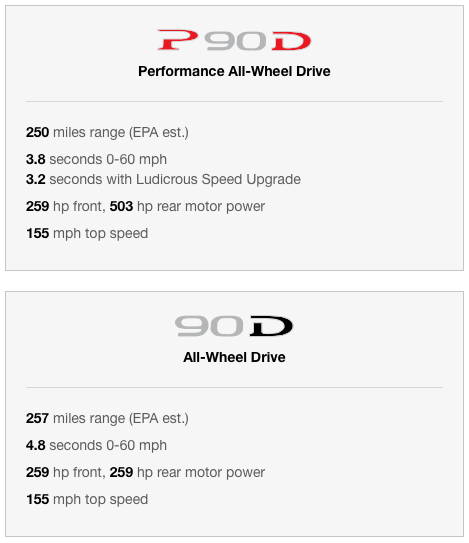 Tesla has already introduced two models that will have with lower prices than the Signature Series Model X: a P90D without the Signature upgrades and a 90D. Image source: Tesla Motors.

Buying a Model X without the "P" preceding "90D" is where the real savings will come. If the way Tesla structures pricing for Model X mirrors Model S, choosing not to order a Performance version of the vehicle will save the buyer $20,000.

So, what could the base price for Model X be?

Competitive with Model S
If the success of Model S at its price point is any indication of how the Model X will sell relative to other SUVs in its price range, it's looking like the price for the SUV will actually be an advantage -- not a disadvantage.

Understanding how Model X pricing is actually competitive with Model S begins with a tweet from Tesla CEO Elon Musk:

In other words, Model X pricing will be just $5,000 more than a comparable Model S even though it's a larger vehicle and sports falcon-wing doors, along with other features exclusive to Model X -- not a bad upsell. With a 90D Model S starting at $88,000, this would mean a Model X might start as low as $93,000. And even if Tesla makes more of the upgradeable aspects of the Model S standard on the Model X and the base price comes in higher -- say, around $100,000 -- this is $32,000 less than the figure the media is currently citing.

Recognizing the media was still confused after the Model X launch event on Sept. 29, Musk reminded everyone on Twitter again of pricing:

After spending lots of time with Model X at Tesla's event, the fact that Tesla was able to pull off Model X for just $5,000 more than a comparable Model S is quite impressive. Indeed, based on the incremental value offered in Model X relative to the $5,000 price increase, the company's prediction that Model X sales will eventually match Model S sales seems conservative.

Even more, it's important to note that Tesla says it will introduce even lower-cost configurations down the road with smaller batteries. While the Model X is clearly still an expensive car, it's probably even more competitive with comparable SUVs than the Model S is with comparable sedans.