Up until electric-car maker Tesla Motors' (TSLA 1.24%) third quarter, most of the company's deliveries were about on pace for it to achieve its ambitious outlook for full-year deliveries. After all, the company was planning for the first half of the year's deliveries to lag behind the second half's.

But now, with Q3 in the rearview mirror, it will take a massive fourth quarter for the company to achieve its recently downwardly revised targets.

Third-quarter deliveries
Tesla delivered 11,580 vehicles during Q3, the company said in a press release on Friday afternoon. This is up 49% from the year-ago quarter, and by about 50 vehicles from the prior quarter.

"This includes our first deliveries of Model X," the company said.

These third-quarter deliveries were in line with the company's guidance provided in its second-quarter letter to shareholders to "deliver approximately the same number of vehicles as in Q2."

While Tesla's reported year-over-year growth in vehicle deliveries was about in line with growth in recent quarters, its lack of sequential growth may raise some eyebrows. At least one factor contributing to the unimpressive sequential growth was a planned shutdown at the factory for one week as Tesla made changes to stamping, the Model S body center, drive unit production, battery module and pack production, and general assembly. The changes were aimed at enabling a higher level of production and efficiency, Tesla said in its second-quarter letter to shareholders. The company also noted it used the week to "validate newly installed equipment by completely building several Model X test vehicles."

Were Tesla's third-quarter deliveries big enough?
While Tesla's quarterly guidance has historically been fairly accurate, the company more often than not beats its own guidance by a wider margin than it did during Q3. Will Tesla's relatively unimpressive Q3 deliveries make achieving its full-year delivery target of 50,000 to 55,000 vehicles difficult? 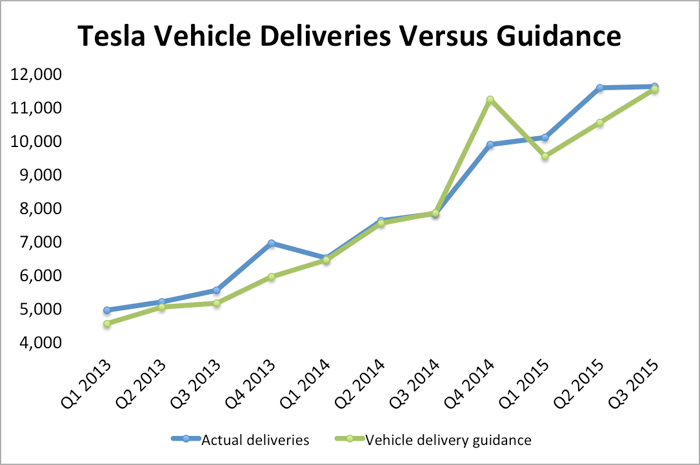 In order for Tesla to hit the low end of its full-year guidance, the company will need to deliver a whopping 17,000 vehicles during Q4, representing 47% growth sequentially and 73% year over year.

Can Tesla really pull off a quarter this good? 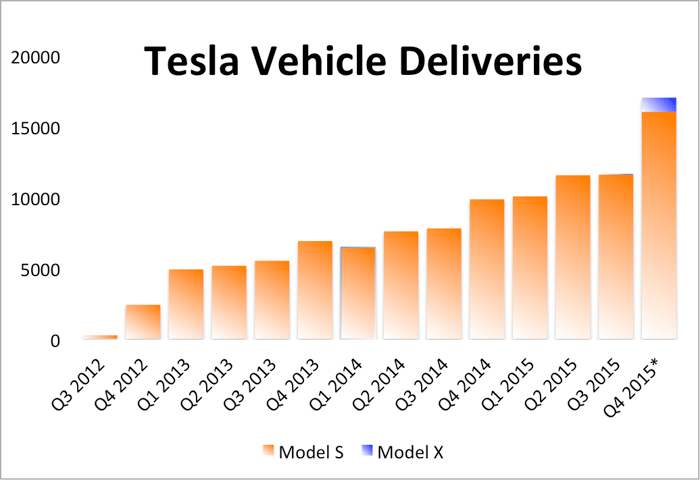 Given that this range of 50,000 to 55,000 vehicle deliveries for the full year was laid out in the same quarterly letter in which Tesla provided Q3 guidance for about 11,500 vehicles, apparently a huge fourth quarter is a part of the company's plan.

But with a shared general assembly line for the Model S and X and the overall complexities of ramping production of a new vehicle, the uncertainty regarding Tesla's fourth-quarter vehicles is high. The company explained its uncertain fourth quarter in its second-quarter letter to shareholders:

While our equipment installation and final testing of Model X is going well, there are many dependencies that could influence our Q4 production and deliveries. We are still testing the ability of many suppliers to deliver high quality production parts in quantities sufficient to meet our planned production ramp. Since production ramps rapidly late in Q4, a one-week push out of this ramp due to an issue at even a single supplier could reduce Model X production by approximately 800 units for the quarter. Furthermore, since Model S and Model X are produced on the same general assembly line, Model X production challenges could slow Model S production.

Fortunately, during Q4, Tesla will have its second production line up and running to help it achieve its new delivery targets. Even so, there's clearly significant risk to Tesla's outlook for full-year deliveries.

Investors will get considerable insight into whether or not Tesla is still confident in its ambitious fourth-quarter target when it reports third-quarter results and provides specific guidance for Q4. Given that Tesla usually reports quarterly results more than a month into the next quarter, this guidance will provide a window into the quarter's progress. Last year, Tesla shared third-quarter results on November 5. So, look for Tesla to announce a third-quarter earnings date around this timeframe.