What: Shares of Boardwalk Pipeline Partners (NYSE:BWP) were pulled down more than 10% in the month of September thanks to a general decline in the energy and MLP space in particular. The biggest reason these sectors were hit hard is the possibility of banks tightening their lending to the energy sector.

So What: First things first, Boardwalk was fighting a big uphill battle this past month that made a 10% decline almost inevitable. The company was recently added to the Alerian MLP index, making it part of the Alerian MLP ETF (NYSEMKT:AMLP). Over the month the entire MLP index and ETF declined 12%. In that context, the 10% decline by Boardwalk doesn't seem that bad. 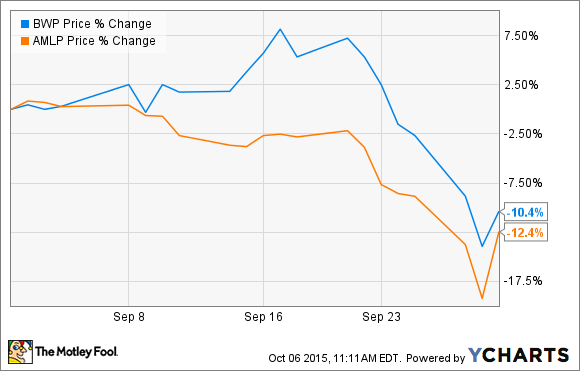 There are a couple of factors at play here when it comes to why the entire MLP space has suffered so much in recent weeks. The first is the continued decline of oil and gas activity is finally starting to sink its teeth into the nation's production numbers. As production growth stalls and actually turns to decline, the demand for new pipeline volumes isn't there right now. This brings into question the billions of dollars in investments pipeline companies are making to accommodate the more recent growth numbers.

The other big factor at play here is the tightening of credit for the oil and gas sector. Cheap oil and gas prices are making many banks and other lenders re-evaluate the credit lines available to these companies, which could mean that the cost of debt to fund new projects could increase across the board. For Boardwalk, this could mean its current project backlog of $1.5 billion might be more expensive to build.

Now What: These are the factors impacting the entire space, but they don't all necessarily translate to issues for Boardwalk. There are two things to keep in mind with Boardwalk that make these issues seem less pressing. One is that it has an investment grade credit rating thanks to its well financed general partner Loews (NYSE:L), meaning that access to capital shouldn't be too difficult. The other is that many of Boardwalks projects are what are known as demand-pull projects, meaning that most of its customers are end users of oil and gas like power plants and manufacturing facilities. These customers are much less likely to lower their volume demands as oil and gas prices decline.

Looking at this, it would seem that this past month's decline is a bit overdone, and it could be a buying opportunity. Keep in mind, though, that the company does have its own issues to work through. The company slashed its distribution by 80% last year because it was overloaded with high debt levels and it was paying out too much to its shareholders, and its still dealing with these debt issues while it builds out that $1.5 billion in projects. Based on its current financial position and lack of visibility for distribution growth in the future, there are simply more lucrative opportunities in the MLP space to be excited about Boardwalk's stock.