A less than awesome year for farmers suggests that fertilizer demand will be down in the coming year, which is weighing heavily on CVR Partners stock.

What: Shares of CVR Partners ( UAN 1.81% ) slid more than 16% in the month of September, which gave back almost any gains that the stock had made in 2015. While the company didn't post any significant news this past month, this month the company was hit with declining fertilizer prices.

So What: For the most part, you might think that a product such as fertilizer would have rather consistent demand from year to year as farmers look to grow yields, especially in products such as corn where there are multiple outlets for its use. In truth, though, fertilizer is a cyclical commodity just like everything else, and so far this year it is looking like fertilizer demand will be low.

With prices for corn and beans at or near breakeven prices for many farmers this year, many farmers will look to do more vigorous soil sampling to see how they can cut back on fertilizer for the coming year. This will ultimately lead to lower overall demand for nitrogen based fertilizers, and by default lower prices. So its very possible that the coming year we could see margins at CVR Partners decline.

One thing that the company has going for it, though, is its increased scale thanks to the merger with Rentech Nitrogen Partners (NYSE: RNF). The merger will create one of the largest nitrogen fertilizer manufacturers in the nation, with a strong presence right in America's corn belt. If CVR Partners can effectively execute the merger, it should give the company greater scale that will help it endure the down cycles in the market. 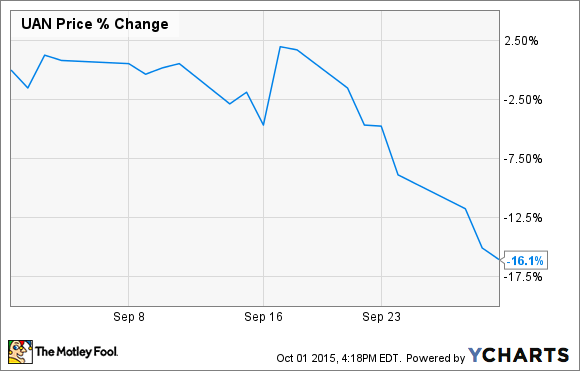 Now What: Seeing big declines like this always brings about the question whether the company's shares are oversold and there is a chance to buy shares of CVR Partners at a discount. One thing to keep in mind, though, is that the company's shares have been on a slow decline for years. Ever since 2012, shares of CVR Partners have declined more than 60%. Nitrogen based fertilizer is becoming a tougher and tougher business to be in as natural gas prices -- a primary feedstock for nitrogen fertilizer --have brought several competitors into the space.

With weak expected demand in the coming season for fertilizer and the growing competition to manufacture the product, it may be worth waiting out this stock until we see a couple quarters of results with CVR Partners and Rentech Nitrogen as a single company to see what kind of advantages it can muster from the merger.