Republic should be able to hire more pilots with better pay, but the cost will keep its pre-tax margin below the company's target of 7.5%.

Profitability has plummeted this year at regional airline Republic Airways (NASDAQ: RJET) as a long-running pilot contract dispute has snarled operations. Due to the poor pay included in Republic's current pilot contract, many of its pilots have left for better jobs in the past year, and it is difficult to recruit replacements.

Republic's management had seen this coming and it offered pilots an improved contract in early 2014. However, while the union agreed to the proposed contract, the pilots themselves rejected it in a ratification vote. Finally, after a year and a half of mudslinging, the company and the union have reached a new tentative agreement that could get Republic back on the right track.

Low pilot pay was untenable
Republic's pilots have been working under a contract signed in 2003, when the airline industry was in the midst of a deep slump. As a result, its pilots -- particularly first officers -- have relatively low pay, even by the meager standards of the regional airline industry.

For example, the current contract pays new hires at Republic a base rate of $22.95/hour for the first year, rising to $30.88/hour in the second year. By contrast, at leading regional airline SkyWest (SKYW 3.58%), pilots recently signed a contract that pays first-year pilots $30/hour and second-year pilots up to $41/hour, depending on the aircraft they fly.

As a result, given that both companies are actively hiring, there's not much reason for new pilots to take a job with Republic right now if they get an offer from SkyWest. The constant union-management fighting at Republic has probably also been a turn-off for pilot candidates.

This has helped drive a stunning reversal in the two companies' fortunes. Last year, SkyWest's profitability cratered due to its heavy reliance on unpopular 50-seat regional jets. This was capped by two big quarterly losses in the first half of 2014. Meanwhile, Republic's growing fleet of two-class regional jets (primarily 76-seat E175s) drove strong margin expansion. 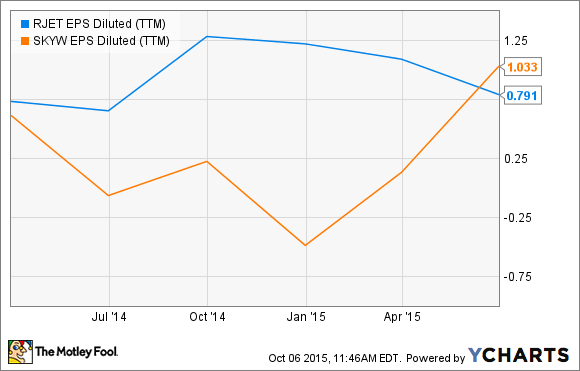 Republic Airways vs. SkyWest Earnings Per Share, data by YCharts

In 2015, Republic's profit margin has plummeted as it hasn't had enough pilots to complete its scheduled flying. Productivity has suffered, and it has missed out on operational bonuses from its mainline partners. Yet SkyWest has had adequate pilot supply this year, and it has been able to boost its earnings by adding profitable E175s to its fleet while retiring older, unprofitable aircraft.

What the new contract does
Republic's new proposed contract offers a variety of improvements over the current one. These include caps on health insurance premium increases, extended parental leave, more rest time during and after training, and increased vacation time.

The most senior pilots will also get raises, albeit more modest ones. Captain's pay for the E170 and E175 (which represent the vast majority of Republic's fleet) will top out at $110.85/hour after 20 years: up from $108.47 previously. All pay rates will also rise by 1% in each of the next three years.

How will it affect Republic?
The regional airline industry pilot shortage is likely to continue (and quite possibly worsen) in the next few years. But with a new pilot contract in hand, Republic will be in a good position to recruit a disproportionate number of the new pilots looking for work. SkyWest will remain a tough competitor for talent, but smaller regional airlines will have trouble keeping up.

This means that Republic should be able to fill enough pilot slots to cover its flying schedule, thus averting a potential bankruptcy filing. Nevertheless, the new pilot contract will be quite costly to the company.

Republic estimated the three-year cost of an offer it submitted in August at $130 million, while the union estimated the cost of its counteroffer at $150 million. Part of that cost will be reflected in ratification bonuses of up to $21,000 per pilot, payable in two installments.

Deducting those bonuses, the ongoing incremental cost of the agreement would be about $35 million-$40 million per year. That is quite substantial compared to Republic's 2014 adjusted pre-tax income of $120.2 million. It would be a far bigger percentage of the company's 2015 profit, which is expected to be down significantly year over year.

If Republic can catch up on some of its hiring needs in the next year or two, its underlying profitability should improve due to higher aircraft utilization and the ongoing shift toward more profitable E175 flying. Still, after accounting for its increased pilot costs, it would likely remain far short of its 2013-2014 level of profitability.

To return to its profitability target of a 7.5% pre-tax margin, Republic was relying on a fleet simplification plan that would have moved it to a single fleet type by the end of 2016. This would have reduced the frequency of pilot training events, improving pilot productivity.

However, Delta Air Lines' surprising decision earlier this year to extend an expiring contract for 50-seat jets flying through 2021 threw a wrench in that plan. Despite this issue, Republic Airways stock looks fairly cheap, having lost more than half of its value in 2015. But unless it manages to renegotiate this contract, its profit margin probably will fall short of its target for the foreseeable future.