Please ensure Javascript is enabled for purposes of website accessibility
Free Article Join Over 1 Million Premium Members And Get More In-Depth Stock Guidance and Research
By Adam Levine-Weinberg - Oct 8, 2015 at 9:05AM

A guidance update on Wednesday set the table for a record-beating quarter.

On Wednesday afternoon, Hawaiian Holdings ( HA -2.39% ) updated its third quarter guidance, revealing that the Hawaiian Airlines parent is on track to report even better quarterly earnings than originally expected. That's saying something, considering that the airline had already projected that it would earn a record profit in Q3. 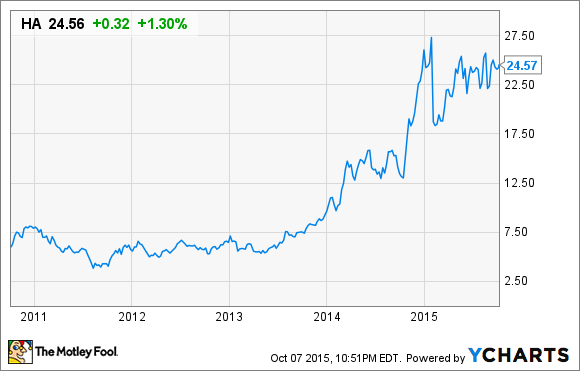 Hawaiian Holdings stock hasn't made any headway in the first nine months of 2015, after surging throughout 2013 and 2014. While the company's earnings and free cash flow have both skyrocketed this year, investors were apparently hoping for more. This update (and the upcoming earnings report) could be the "more" that gets the stock moving higher again.

Hawaiian's original guidance
In July, Hawaiian Airlines provided solid but not spectacular guidance for the third quarter. The company projected that unit revenue would decline 4%-7% year over year, due primarily to the strong dollar and falling fuel surcharges on international routes. Meanwhile, nonfuel unit costs were expected to rise 2.5%-5.5% due to wage increases, higher pension costs, and more maintenance events than in Q3 2014, among other things.

Based on all these factors, Wall Street analysts estimated (on average) that Hawaiian Airlines would post adjusted earnings per share of $1.11 for the quarter, up from $0.79 in Q3 2014.

Meanwhile, the unit revenue decline will be in the upper (i.e., better) half of the guidance range. Finally, oil prices fell during the quarter, so the average cost of jet fuel for Q3 will be around $1.93-$1.98: about $0.10 lower than the original guidance at the midpoint of the range.

Hawaiian Airlines' updated guidance implies that the company's third quarter profit will come in well ahead of expectations. Based on the numbers provided, $1.20-$1.30 is a likely range for EPS. (Recall that analysts were recently expecting $1.11.) There's even some upside to that range if the company was active in repurchasing stock last quarter.

The stock now looks even cheaper
Hawaiian Holdings was already a cheap stock before the recent investor update. At Wednesday's closing price of $24.56, the stock traded for just nine times the average Wall Street 2015 earnings estimate.

That's about half the average earnings multiple for the broader market. Moreover, Hawaiian Airlines probably has better earnings growth prospects than the average company, largely thanks to the upcoming arrival of the extremely fuel-efficient A321neo beginning in 2017.

Hawaiian Airlines' recent guidance update suggests that Wall Street's earnings estimates are too low, though. Instead of posting EPS of $2.74 -- as previously expected -- Hawaiian could earn $2.90 or more per share for the full year.

The average 2016 EPS estimate of $2.92 is also probably too low. Even if Hawaiian's net income doesn't budge next year, it should be able to improve on its 2015 EPS simply by reducing its share count through completing its $100 million buyback program and settling a set of stock warrants expiring in 2016.

As the market starts to reassess Hawaiian Airlines' earnings prospects, the stock may finally regain some of its momentum. But the real fun for investors will probably come after the A321neos enter service in large numbers between late 2017 and 2019.