Hello, and welcome to the third earnings season of 2015. Quarterly results will be coming at us thick and fast during this period, as will the occasional dividend declaration. Which means, of course, that we'll (hopefully) be seeing a clutch of raises in said payouts.

It's good to be an income investor during such periods. Hearing news that one of our stocks will be paying us more is a real morale booster. Just ask the folks who own shares of these two early-in-the-season dividend raisers:

Bank of the Ozarks
Sometimes it's good to be one of the finance industry's little guys. Regional banking group Bank of the Ozarks (NASDAQ:OZK) is doing well, and shareholders are benefiting. Last week, the company boosted its dividend by 4% to just under $0.15 per share.

That's very much in character for the bank, which is fond of bumping its payout on a regular basis -- it has now done so for 21 quarters in a row.

And why shouldn't it? In the company's most recently reported quarter, it posted a bottom line of nearly $45 million, 69% higher than in the same period a year ago. Credit quality is reassuringly strong -- net charge-offs during the quarter dropped by more than 30% to $1.7 million. That's tiny compared to total assets of nearly $8.3 billion.

These good results have helped lift the company's shares; so far in 2015, they're up by 22%, despite a generally gloomy year for bank stocks. This has given Bank of the Ozarks the flexibility to pay for acquisitions with shares, which it has done in its recent purchases of smaller lenders Bank of the Carolinas and Intervest Bancshares. 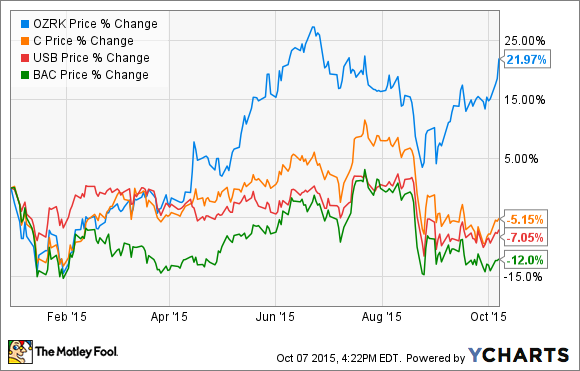 The new assets should help Bank of the Ozarks continue to improve its attractive fundamentals. They'll also support the dividend, which I believe will keep ticking up steadily.

The company's upcoming distribution will be paid on Oct. 23 to shareholders of record as of Oct. 16.

Thor Industries
Summer and its easy leisure time might be over, but recreational vehicle maker Thor Industries (NYSE:THO) continues to enjoy the sunshine. Buoyed by good results, the top RV maker on the market lifted its dividend by 11% to $0.30 per share last week.

The company has been raising dividends more frequently in recent years. At the beginning of this decade, it began a trend of doing so once a year; prior to that, the payout had been increased only rarely since it was first initiated in 1987.

Thor has got the dosh these days, thanks to a business that continues to grow. The company recently posted record sales and net income (although this was also due to a recent acquisition). Its annual top line is now 45% higher than it was only four years ago, topping the $4 billion mark, while net profit has nearly doubled to $202 million. 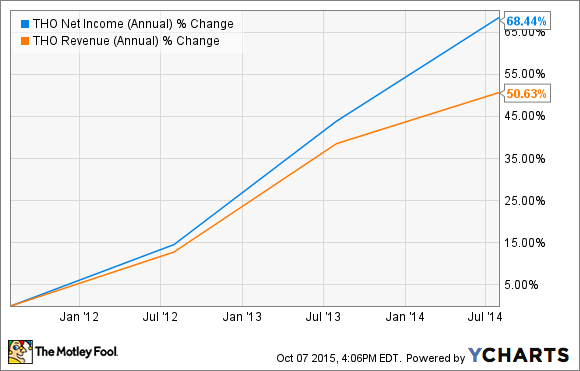 A healthier bottom line equates to more money in the coffers; the company's free cash flow at the end of fiscal 2015 exceeded $205 million, 73% higher on a year-over-year basis. That amount was far more than enough to both pay the company's dividends, and fund $60 million in share buybacks.

This dividend looks safe, then, and we can hopefully expect the company to keep up those yearly raises in the foreseeable future.

Thor Industries' next dividend is to be handed out on Oct. 30 to stockholders of record as of Oct. 16.