Please ensure Javascript is enabled for purposes of website accessibility
Log In Help Join The Motley Fool
Free Article Join Over 1 Million Premium Members And Get More In-Depth Stock Guidance and Research
By Sean Williams - Oct 9, 2015 at 8:23AM

Calls for prescription drug reform blast the original biotech blue-chip stock in September. Could Amgen have more downside to come, or is this latest dip an early holiday gift? 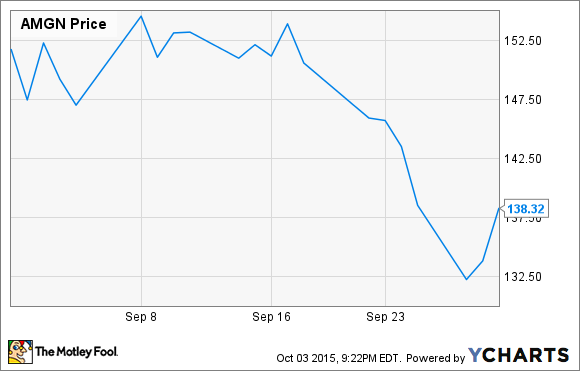 Shares of biotech blue-chip Amgen (AMGN -0.16%) were completely clobbered in September, losing as much as 13% at one point before clawing their way back to end the month down 9% according to data from S&P Capital IQ. The drop officially wiped out $10 billion in market value for Amgen in September.

By far the biggest downside catalyst was a proposal offered by presidential hopeful Hillary Clinton to reform the pharmaceutical industry in regard to the way it prices drugs. Following the 5,500% price increase of a rare disease drug by privately owned Turing Pharmaceuticals (this price increase was lowered just days later amid public pressure), Clinton introduced a proposal aimed at placing a cap on monthly out-of-pocket expenses for prescriptions drugs of $250 (for eligible drugs), and plans to use the federal government as a bargaining chip to coerce drug companies to lower their prices.

This is concerning because Amgen's most recent therapy approved by the Food and Drug Administration, Repatha, a PCSK9 inhibitor designed to lower LDL-cholesterol in select patients, carries a wholesale cost of $14,100 per year. With expectations that Repatha's label could widen in the coming years to consumers without pre-existing cardiovascular risk factors, Repatha has been quoted by some to be an insurance industry killer because of its high price point.

The other issue is simply rising levels of short interest at Amgen. Even though just 1.6% of its float remains held by short-sellers (traders who make money when the stock price drops), total short shares held rose by 1.17 million from the prior month. Increasing pessimism could certainly have weighed on Amgen's stock in September.

Now for the $64,000 question: Is this dip in Amgen your opportunity to pick up shares "on the cheap?"

If you had asked me this question a few months ago I probably would have passed on Amgen. However, with its shares now 22% off their all-time high set earlier this year, and the company logging six FDA approvals within the past year, I believe considering Amgen as a long-term buy might be a smart move.

Although it was buried under a sea of bad news last month, Amgen and partner Allergan announced that their biosimilar candidate of Avastin, ABP 215, was just as effective in a lung cancer study as the innovator drug. Biosimilar drugs like Amgen/Allergan's ABP 215 could become an integral component of the healthcare picture in the coming years as they could sport 15% to 50% discounts compared to innovator drugs, offering the discounts that lawmakers so eagerly seek, but could still net drugmakers hefty recurring profits.

With Amgen pushing headfirst into cardiovascular, oncology, inflammation and bone health, I see little reason to not consider its forward P/E of 13 or PEG ratio of 1.2 a potential bargain.