Please ensure Javascript is enabled for purposes of website accessibility
Log In Help Join The Motley Fool
Free Article Join Over 1 Million Premium Members And Get More In-Depth Stock Guidance and Research
By Sean Williams - Oct 10, 2015 at 8:01AM

Ariad shareholders learned the hard way in September that betting on a buyout is not a smart investing strategy. 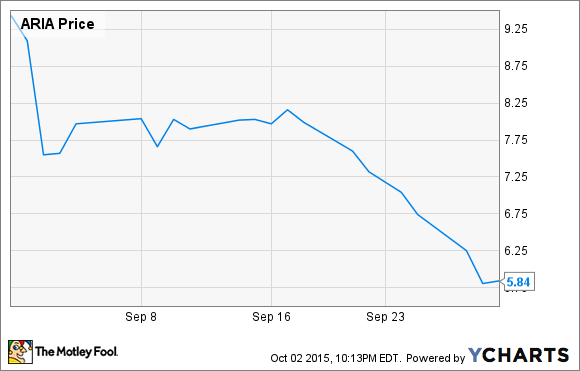 Shares of Ariad Pharmaceuticals (NASDAQ: ARIA), a biotech company focused on developing therapies to treat cancer, were completely pummeled in September, losing 38% of their value, according to data from S&P Capital IQ.

The primarily culprit behind Ariad's drubbing was a late August report that Baxalta (NYSE: BXLT), formerly a component of Baxter International, was in talks to potentially buy Ariad. When this news emerged, Ariad's stock price surged from the mid-$6 level to nearly $10. On Sept. 2, 2015, Baxalta announced that it was backing away from the idea of purchasing Ariad after the two companies failed to agree on a purchase price. Additionally, as reported by Bloomberg, some of Ariad's investors seemed to dissuade Baxalta's management team from pursuing the deal. As soon as the prospect of a near-term buyout was off the table, Ariad's stock plunged.

The other issue for Ariad last month was one that practically the entire biotech sector faced: the prospect of prescription drug reform. Ariad's only approved product is Iclusig, a late-stage blood cancer therapy that has a wholesale cost in the neighborhood of $115,000 per year. Its high cost likely puts it on the list of therapies that could come under fire from any reform proposal.

As a refresher, presidential hopeful Hillary Clinton introduced a proposal last month that would cap the out-of-pocket expenses of consumers for certain drugs each month, and would work toward reducing the pricing power of drug companies.

The big question on everyone's minds now, following Ariad's whopper of a correction in September, is whether or not the stock has a shot of flying higher over the long-term. To that end, I do believe there could be some modest upside, but I don't share the same vision as ultra-optimists of Ariad seeing the $20 level again as it did in 2013.

Personally, I don't view prescription drug reform as a big concern for Ariad or drugmakers in general. Any attempts to curb pricing power will probably fail to hit the mark, as it could threaten jobs and innovation in the United States. Also, with insurers and pharmacy-benefit managers holding little power in their corner to control medical cost inflation (and especially costs for late-line products like Iclusig that have demonstrated superior response rates), concerns about prescription drug reform are likely overblown.

Instead, I'd be worried about Iclusig's ability to expand into new indications considering its prior safety concerns. Keep in mind that Iclusig was briefly taken off pharmacy shelves in 2013 after a two-year follow-up study showed an increase in vaso-occlusive events in patients taking the drug. While effective, Iclusig's potentially serious side effects could relegate it to a lot of second- or third-line label indications where prospective patient pools are much smaller.

Thus we have our dilemma: we have superior response rates when patients progress on other blood cancer therapies, but we also have adverse event concerns. Therefore, I do believe Iclusig sales can keep growing, and Ariad can push toward profitability by the end of the decade. But, with a valuation of $1.2 billion already, I believe investors should keep their expectations modest.

The Motley Fool recommends Baxter International. Try any of our Foolish newsletter services free for 30 days. We Fools may not all hold the same opinions, but we all believe that considering a diverse range of insights makes us better investors. The Motley Fool has a disclosure policy.