Please ensure Javascript is enabled for purposes of website accessibility
Free Article Join Over 1 Million Premium Members And Get More In-Depth Stock Guidance and Research
By Rich Duprey - Oct 11, 2015 at 8:03AM

Even though the sexes are very different, there is common ground in the brands we trust the most.

Heinz ketchup, which goes with almost everything, is a highly trusted brand. Image source: Mike Mozart.

Men and women might be wired differently, but when it comes to how we look at consumer products, we might not be as far apart as you'd imagine.

It's a matter of trust
According to the 2015 Harris Poll EquiTrend study, both men and women view the goods and services around them with an equally practical eye. There are differences, of course, some perhaps a result of the roles each gender still plays in society, but the similar nature of their choices -- and in a couple of instances, the exact same ones -- indicates we're pretty much aligned.

For example, Newell Rubbermaid's Sharpie markers were the seventh most-trusted brand for women, while Duracell batteries, which was just acquired by Warren Buffett's Berkshire Hathaway, was ranked fifth out of the 10 most-trusted brands for men.

On the surface they might not seem to have any commonality, but when you consider their practicality and reliability, you can see why the two rank highly.

This past summer Harris Poll, which is owned by market research firm Nielsen, asked more than 88,000 consumers over the age of 15 to rate 40 randomly selected brands based upon their familiarity with them. Overall, some 2,267 brands were rated with each one receiving approximately 1,000 ratings. The results were weighted to be representative of the entire U.S. population based on age by sex, education, race and ethnicity, region, and income. For survey participants aged 18 and over, they were also weighted for how likely they were to be online.

The survey was designed to see just which brands of consumer products Americans trust most.

Seeing eye to eye
The results piqued the interest of the researchers as gender roles seemed to be blurring. In an interview with AdWeek, Nielsen's managing director of consumer insights Mike de Vere says, "If I were a brand manager or advertising executive, I would be really intrigued to understand whether or not men and women see different benefits in some of these overlapping brands."

Johnson & Johnson's Neosporin antiseptic ointment was ranked No. 4 by women, but came in third with men.

The antibacterial is one of the few products that was ranked highly by both genders -- only two others did as well -- suggesting J&J may want to rethink its market. On its website, it identifies the ointment as the "#1 Mom recommended" treatment for minor cuts and scrapes. It may want to start including dads, too.

So what were the other two brands that were the most trusted by both men and women? Reynolds aluminum foil and Band-Aid adhesive bandages.

Wrap it up!
Reynolds, which is ultimately owned by mining giant Alcoa, came in third with women and fourth with men, while J&J's Band-Aid ranked No. 2 and No. 1, respectively, making the adhesive bandages one of the most powerful brands (interestingly, while J&J's site shows, presumably, a father and daughter together, it's the daughter applying a Band-Aid to her father's finger).

Females are still seen as the caregivers in this J&J promo for its Band-Aid brand adhesive bandage. Image source: Johnson & Johnson.

As recently as 2013, Band-Aid was seen as having the overwhelmingly dominant brand in the U.S. wound care market with a 38% share of all wound care sales and 64% share of adhesive bandages. Sales and share have slipped as rivals like 3M have developed competing products, but it's been the rise of private label alternatives that have caused the greatest loss.

It's the fact that brands like Band-Aid or Reynolds become synonymous with their industries that makes them so valuable. Harris Poll noted, "Brand trust is one of many important factors that influence equity, sales and market share. Manufacturers can leverage brand trust to boost sales of new products: nearly 6-in-10 global respondents (59%) prefer to buy new products from brands familiar to them."

In a world of their own
Here's the full brand rankings list by gender: 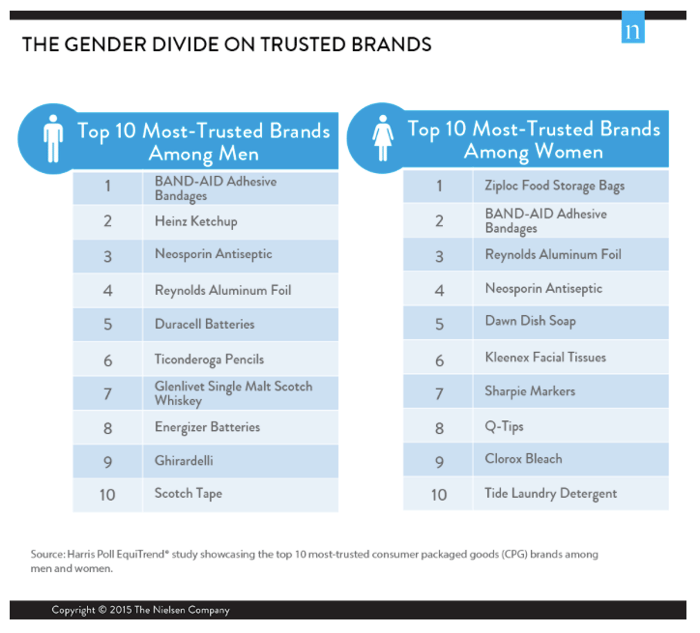 Women, in particular, were seemingly moved by practicality and convenience while men showed both eccentricity (Glenlivet scotch whisky) and idiosyncrasy (Ticonderoga pencils). Men also really like their batteries as Energizer batteries also scored well (No. 8).

Men may be from Mars and women from Venus, but when it comes to brand trust, we're really both interested in convenience and reliability.