In a market where many pundits and investors think stocks are overpriced, American Airlines (NASDAQ:AAL) has stood out this year as a screaming bargain.

The company is poised to report its eighth consecutive record quarterly profit later this month. Yet after surging to an all-time high of $56.20 in January, American Airlines shares have fallen up to 40%. In recent months, the stock has been bouncing around the $40 mark, trading for less than five times American's projected 2015 earnings. 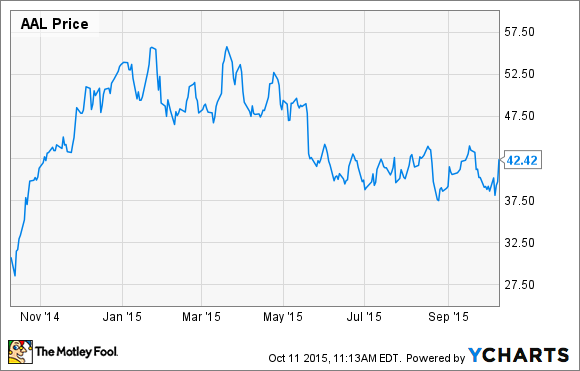 American Airlines' management has recognized that the stock's valuation is absurdly low. The company has gone on a buyback binge in the past few months, buying more and more stock as the share price has fallen.

Earnings up -- stock price down
Since the current management team took over following the American Airlines-US Airways merger in late 2013, the company has avoided fuel hedging. This has allowed American to reap a massive windfall in 2015 as fuel prices have fallen.

Through the first six months of 2015, American posted an adjusted profit of $3.1 billion: up 67% year over year. (That's even more remarkable because the company had posted a record profit in each quarter of 2014.) The company's recent guidance implies that it will post an adjusted profit of roughly $1.9 billion in Q3, up from $1.2 billion a year earlier.

Despite this run of stellar profitability, the market has punished American Airlines stock in 2015. Many investors feel that profit growth driven by low fuel prices isn't "real" or sustainable. That's because American's unit revenue has fallen this year, hurt by pockets of rising competition in the U.S., the strong dollar, and falling fuel surcharges on international routes.

The board approved a $2 billion share repurchase program in January. American Airlines spent $190 million to buy back 3.8 million shares of stock in Q1. As the stock price really started to slide, management accelerated the pace of repurchases during Q2, buying back 17.3 million shares for $753 million.

The American Airlines board then doubled the repurchase authorization to $4 billion in July. On the company's earnings call that month, CEO Doug Parker told analysts and investors that he thought the stock was dramatically undervalued. He also made it clear that he saw this as a great opportunity to buy back even more stock at a discount.

Buybacks on the cheap will add value
In theory, the purpose of share buybacks is to reduce a company's share count so that its income is spread over fewer shares. This increases earnings per share -- which hopefully benefits the stock price. American Airlines' massive share repurchases this year haven't stopped its stock slide, though. That might lead some investors to conclude that the buybacks aren't working.

However, that's only true in the short run. Right now, the impact of American's share buybacks is being offset by negative sentiment caused by its unit revenue declines.

As the carrier's unit revenue trajectory improves over the next few quarters -- thanks to easier comparisons, integration benefits, and (hopefully) economic turnarounds in key foreign markets -- that negative sentiment should reverse. But the reduced share count will remain, providing a permanent EPS benefit.

The more shares American Airlines can buy back at a discount, the better off its long-term shareholders will be. By accelerating the company's EPS growth, American Airlines' share buybacks could act as a slingshot, driving a strong recovery for the stock in 2016.