What: Shares of SunCoke Energy (NYSE:SXC) closed more than 28% today after it reported greater-than-expected earnings losses for the previous quarter.

So what: SunCoke Energy's loss of $0.36 per share came in well below the consensus estimates from S&P Capital IQ, which was targeting for net income to be a positive $0.06 per share for the quarter. A large component of that net loss for the quarter came from the noncash $19 million asset writedown for its Indian joint venture VISA SunCoke. Even adjusting for the writedown, though, the company's normalized net loss still came in below expectations at negative $0.06 per share.

Management attributed the company's weaker results in large part to the underperformance of its Indiana Harbor facility. However, looking out over the broader landscape, it's not too hard to see why SunCoke has not performed too well lately. Not only has demand for metallurgical coal declined on a general slowdown in steel manufacturing, but metallurgical coal in particular has been hit even harder as many U.S.-based steel manufacturing has moved over to direct-reduced iron facilities that don't use metallurgical coal. As a result, SunCoke has seen per-ton profit levels for its coal fall precipitously.

The one silver lining in SunCoke's results for the quarter was that its master limited partnership, SunCoke Energy Partners (NYSE:SXCP), did better than expected as well as raised its guidance for adjusted EBITDA and distributable cash flow.

Now what: Can you think of a tougher market to be in right now than metallurgical coal? There certainly aren't many out there, and shares of SunCoke Energy and its partnership have reflected that rough operating environment for much of this year. 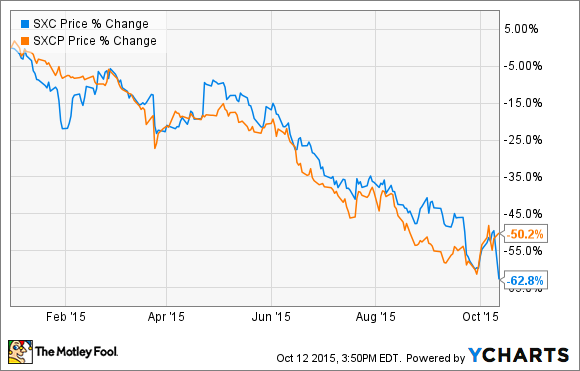 There are a lot of headwinds that SunCoke is fighting against, and the diminishing use of metallurgical coal might suggest that investing in SunCoke is an attempt to get the last few puffs of a cigar. For SunCoke to really mount any sort of recovery, the company will need to see some rebound in metallurgical coal demand, but based on the general market for steel and other commodities, it would seem that a rebound in prices is a long way off.