The shares of newer and smaller companies such as Under Armour (NYSE:UAA) and Skechers have been on a tear recently, leaving investors very satisfied. With their success, it has been easy to overlook the old stalwart Nike(NYSE:NKE). This would be a mistake, as even with a greater than $100 billion market cap, Nike's growth story is far from over. While I am a happy Under Armour shareholder, I believe that both companies are poised for market outperformance in the decade to come. 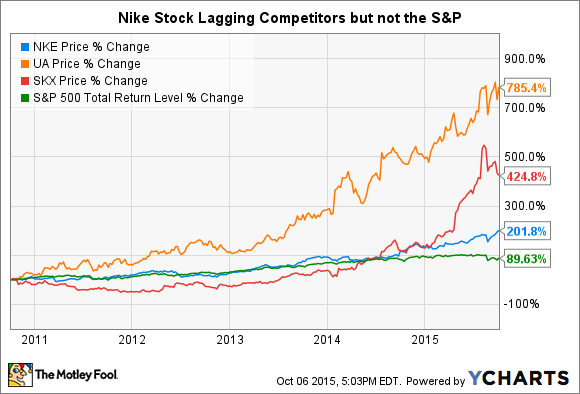 Comfortable Converse
The Nike brand is a monolith that is desired from Boston to Beijing and drives much of the company's pricing power. In the most recent quarter, over 93% of total revenue was derived from its eponymous brand. The company has recently been making moves to expand its portfolio of brands and has been making some positive strides with Converse, a wholly owned subsidiary of Nike since 2003.

Converse's classic Chuck Taylor All Stars, which were initially produced in 1917 and endorsed by Taylor in the 1920s, have undergone a redesign. The classic elements of the sneaker have been retained, while its comfort and stability have been enhanced. In the most recent quarter, revenue for the Converse brand was $555 million.

While this is not yet enough to truly move the needle for Nike, it's important for a few reasons. The company is designing a series of shoes around the platform that should increase its profile as a lifestyle brand. It also presents an interesting blueprint for Nike to absorb financially troubled or mismanaged brands that are nevertheless beloved by consumers and push them through the Nike machine. Better technology, materials, marketing, and distribution could do for many other brands what it has already done for Converse.

If you're an investor in nearly any consumer goods company, you've heard about China ad nauseam. For Nike, the China story is really breathtaking and somehow still only in the early to middle stages. Revenue in Greater China was up 30% year-over-year last quarter. The largest revenue segment was footwear, which was up 36% year-over-year.

Nike continues to grow in North America, parts of Europe, Japan, and emerging markets, but it is the strength in China that makes this such an exciting opportunity. I can easily envision a scenario where the past 10 to 20 years of Nike in North America are replicated in China, albeit in a market with over 1.3 billion people.

Margins, taxes, and prudent buybacks
Revenue growth has been wonderful, but for a company as large and stable as this, I also like to see management wring out inefficiencies and figure out the best ways to allocate excess cash. On these fronts, Nike has been operated extremely well. Gross margins expanded 90 basis points to 47.5%, and the company was able to reduce its tax rate by over 300 basis points from the same period last year. This may not seem like much, but it has a direct and substantive impact on net margin. Net margin expansion plus growing revenues equals higher net income.

The effect of the growth in net income, up 23% to $1.2 billion last quarter, is enhanced by an aggressive and well-planned share repurchase program. Since a four-year $8 billion repurchase plan was authorized in 2012, management has bought back $6.5 billion worth of shares at an average price of $75.70, which is substantially below where shares trade today. The effect of these buybacks can be seen in the decline in fully diluted shares from 971 million in 2011 to currently under 880 million. 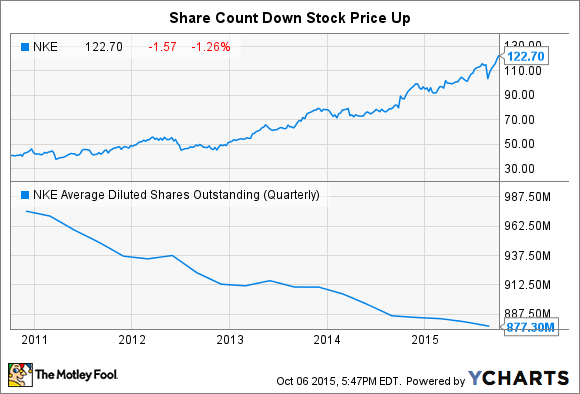 Nike remains a buy in my book, and you don't have to choose between it and Under Armour. I believe there are enough growth opportunities for both to succeed. Nike is a more conservative investment with less potential upside, but it is far from the stodgy old company some in the financial media make it out to be. If you're looking for some global exposure from a stable, U.S.-based company, then Nike might be just what your portfolio needs.