With the launch of electric-car maker Tesla Motors' (NASDAQ:TSLA) Model X SUV finally behind it, the company is turning its attention to the Model 3. As the company's first "affordable" vehicle, the Model 3 represents a major step in the company's mission "to accelerate the advent of sustainable transport by bringing compelling mass market electric cars to market as soon as possible." You can bet Tesla is taking this vehicle seriously.

Planning to unveil the Model 3 to the public for the first time in March, and with a launch time frame for first deliveries to begin in late 2017, the company is ramping up its investments in the electric vehicle. In a recent presentation at the University of Nevada, chief technology officer JB Straubel provided some insight into Tesla's early steps as it shifts its focus to the Model 3.

Going all-out on the Model 3
During Straubel's presentation, he reinforced the company's three-step plan, which Tesla CEO Elon Musk had outlined to investors as early as 2006:

"Most of the people inside of Tesla are no longer working on the S and the X, but they're hard at work designing and inventing all the technologies to go into the Model 3," Straubel said. "[I]t's a completely new platform -- different technology base -- and aimed at building hundreds of thousands per year instead of tens of thousands per year."

It's crucial that Tesla's Gigafactory, a battery factory aimed at eventually ramping up production to support 500,000 vehicles per year, comes online in tangent with Tesla's ramp in Model 3 production. Without the Gigafactory, it wouldn't be possible for Tesla to achieve its production and sales goal for the Model 3, as the company's aspiration for annual vehicle sales per year by 2020 represent more than the entire amount of lithium-ion batteries produced during 2013; available production capacity for lithium-ion batteries without a Gigafactory, therefore, wouldn't be enough for Tesla's production targets. 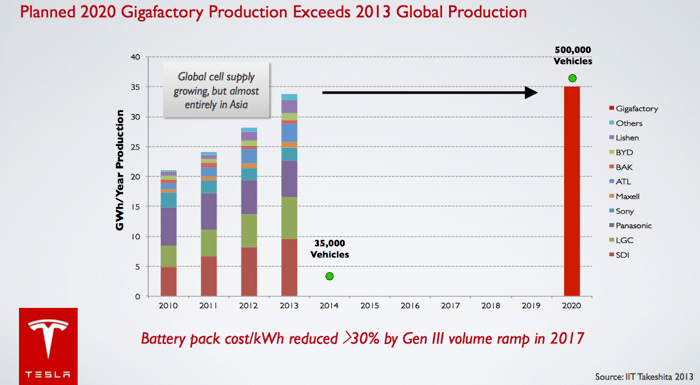 One area directly related to the Model 3 where the company has already made significant investments, is the Gigafactory, which is scheduled to begin initial production during the first half of 2016. Another area where investments for the Model 3 have been made is the company's new paint shop, which was scaled to be able to handle 500,000 vehicles per year.

Model 3: What investors know
Beyond references to Tesla's timeline for the vehicle, little has been said about the Model 3. Key tidbits management has shared so far include:

Investors should keep a close eye on Tesla's development of the Model 3, as well as the company's plans to bring the vehicle to market. There is significant risk to Tesla's business if a blip in its plan to produce and sell the Model 3 occurs. Without the Model 3 ready to ramp production by the end of 2017, Tesla's Gigafactory could temporarily become a liability. On the flipside, Tesla's Model 3 will also need the Gigafactory construction to be on schedule.

Tesla is going to have to make some huge investments, and demonstrate excellent execution, during the next few years as it scales its business. Fortunately for investors, Tesla doesn't seem to be taking lightly the necessary steps required to successfully bring the Model 3 to market.