Want to invest in the prospects for cancer immunotherapy without having to spend the time investigating individual stocks, or by diluting your investment with a general ETF in the biotechnology sector? There's now an ETF that can meet your needs.

The Loncar Cancer Immunotherapy Index ETF began trading on Wednesday. The ETF tracks the index by the same name, which was set up in March to track companies that are developing cancer immunotherapies.

The immune system doesn't do a very good job at attacking cancer because tumors are made up of cells from the patient. The immune system is specifically engineered to attack foreign cells and viruses while not attacking cells it determines to be part of the body it works in. It's not the perfect system -- it would certainly be nice if the immune system naturally removed tumors -- but the checkpoint is there to avoid having the immune system attack human cells haphazardly causing widespread auto-immune disorders such as rheumatoid arthritis and multiple sclerosis.

Bristol-Myers Squibb's (NYSE:BMY) Yervoy, for instance, blocks CTLA-4, a protein on T-cells that is used as a negative signal by antigen-presenting cell, the immune cells that tell T-cells what to attack. Blocking CTLA-4 blocks the signal, and thus regulates the T-cells.

Multiple companies have also developed drugs that block another checkpoint used directly by tumor cells, the PD-1 protein, which also signals to the T-cells to not attack. Bristol-Myers Squibb has one called Opdivo. Merck (NYSE:MRK) also has an FDA approved PD-1 drug called Keytruda. Others, such as Pfizer's and the German Merck KGaA's avelumab, have drugs that block the ligand, referred to as PD-L1, which is expressed on tumor cells, and signals to PD-1 on the T-cells.

The other major class of cancer immunotherapies involve training immune cells to attack the tumor. Dendreon's Provenge, which was purchased by Valeant Pharmaceuticals, was the first cellular cancer immunotherapy using antigen-presenting immune cells called dendritic cells. The cells are removed from the patient, trained to present an antigen on prostate cancer cells, and put back into the patient where the dendritic cells tell the T-cells to attack the cancer cells.

More recently, companies have gone straight to the killer, training T-cells directly in a process using the chimeric antigen receptor to train T cells, referred to as CAR-T. 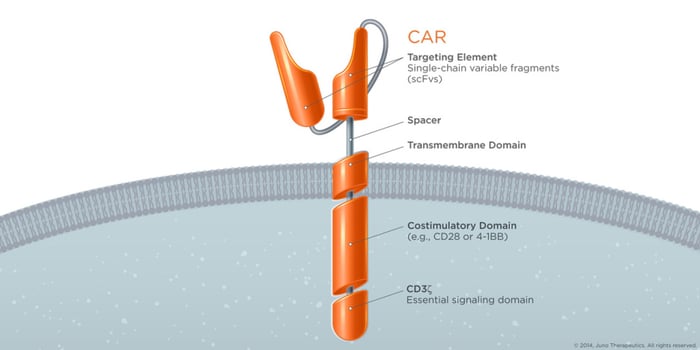 Quite a few companies are working on CAR-T using different antigens, but Juno Therapeutics (NASDAQ:JUNO) is probably the best pure-play bet on CAR-T. Juno Therapeutics has multiple CAR-T therapies in the clinic targeting four different proteins: CD19, CD22, WT-1, and L1CAM. The variety allows for treating different cancers depending on what proteins are expressed on the tumor. Early results suggest that Juno Therapeutics' CAR-T works well against blood cancers that express CD19, but it's less clear whether they'll work for solid tumors, which would create a much larger market for the technology.

To ETF or not to ETF, that is the question
The obvious advantage of using an ETF versus investing in individual companies is that the ETF contains a basket of companies. The more companies you're invested in, the easier it is to capture the eventual winner, and large losses, which are often seen when clinical trials fail, don't have as much of an effect on the share price of the ETF as they do on the individual company stock.

But investors need to keep in mind that no one is making the investment decisions for the ETF. Unlike an actively managed mutual fund, the index that the ETF follows has strict rules about its components. The Loncar Cancer Immunotherapy Index takes the top seven pharmaceutical companies based on their "strategic focus on immunotherapy and their leadership role in a specific type of immunotherapy," and adds in the largest 23 biotech companies working on cancer immunotherapy.

By picking the largest biotechs, the index is biased toward companies that either have large pipelines, and/or companies with high valuations, because investors already think they will do well. As I've argued before, buying premium-priced biotechs isn't necessarily a bad strategy.

The index weights each component equally, and rebalances twice a year, so if you own the ETF, none of the companies will become an outsized component for more than a few months. At that time, the index can also change components, so losers that have fallen below the size threshold could also be sold.

The advantages of investing in a basket can also work against you because you're stuck with the average of all 30 stocks; picking individual stocks could produce outsized returns compared to the index.

While Five Prime Therapeutics skyrocketed 65% on Thursday, the Loncar Cancer Immunotherapy Index was up only 7.6%. Of course, the basket approach helps in the opposite direction, shielding investors from big crashes in the components in the index.

Investing in individual stocks also gives investors more flexibility to weight their holdings according to their risk tolerance. More risk-averse investors, for instance, might choose to have a higher percentage of their holdings in the larger components -- Bristol Myers Squibb and Merck, for instance -- than the 23.3% pharma that the ETF uses at each rebalancing.

With advantages to both strategies, there's no right or wrong answer about whether an ETF or individual stock strategy is better. In the end, it comes down to the needs of the investor.