The oil crash has been brutal on almost all oil stocks, but a mere 4% drop in oil prices in September, the past month has been especially painful for frack sand stocks such as US Silica Holdings (NYSE:SLCA), Emerge Energy Services (NYSE: EMES), and Hi-Crush Partners (OTC:HCRS.Q). 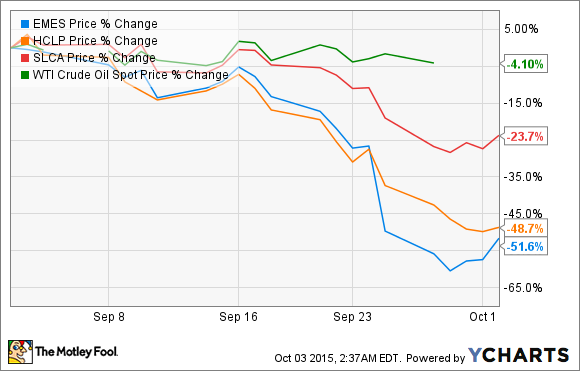 Let's take a look at the three main reasons for the enormous price declines, and, more importantly, whether these factors change the long-term investment thesis of these companies and MLPs. 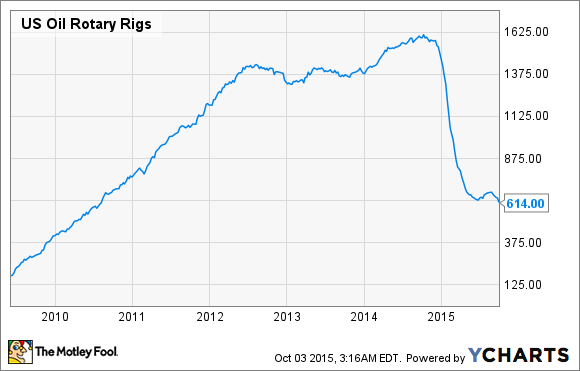 Not surprisingly, the number of U.S. oil rigs continues to decline, to the lowest level in five years, and down 62% from the October 2014 high.

As the number of newly completed wells declines, so does demand for frack sand. According to Emerge Energy CEO Rick Shearer, overall frack sand demand is down around 40% compared with 2014's peak, resulting in more than a 30% tumble in sand prices. This is putting the squeeze on margins, and long-term contracts aren't helping much, since around 66% of Emerge Energy's contracted sand prices are tied to West Texas Intermediate crude oil benchmark prices.

Meanwhile, between Sept. 11 and Sept. 18, U.S. Silica was downgraded by Jefferies, which cited short-term margin concerns, and RBC, which doesn't believe that a recovery in frack sand prices will occur until after 2016.

Finally, Hi-Crush Partners -- which analysts from Robert W. Baird & Co. downgraded along with US Silica and Emerge Energy on Sept. 25 -- was removed from two Alerian MLP indexes on Sept. 18. This move provided additional selling pressure from fund managers who were forced to sell Hi-Crush because of portfolio tracking requirements.

Emerge Energy drops a bombshell ... that means nothing at all
Perhaps the biggest cause for September's frack sand share-price collapse was the Sept. 24 announcement by Emerge Energy that it was withdrawing its previously reduced distribution guidance for 2015.

This announcement caused Emerge Energy to crater 31% in a single day, and US Silica and Hi-Crush Partners followed it down with smaller but still impressive solidarity crashes. 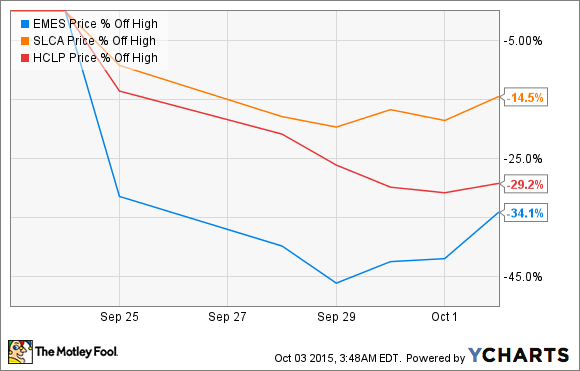 That's because Emerge pays out 100% of its distributable cash flow each quarter. Thus, its payout can be highly volatile, and management was simply telling investors that because of deteriorating industry conditions, it was no longer confident in its last 2015 distribution guidance estimate of $2.50 to $3 per unit, $1.67 of which was paid during the first half of the year.

Management had previously warned during the latest earnings call that Q3's distribution was likely to be lower than Q2's -- which was itself down 43% year over year -- because of having to remain in compliance with debt covenants by maintaining a debt-to-long-term-adjusted EBITDA ratio of 3.5 or less.

With this ratio at 2.2 at the end of Q2, management is confident that it can remain within covenant compliance for the rest of 2015. However, investors and analysts appear unconvinced of the distribution's sustainability past 2015. For example, the day of the guidance suspension, Stifel analyst Selman Akyol downgraded Emerge Energy to "sell," citing debt covenant concerns and stating that "we cannot rule out the partnership suspending its distribution."

Takeaway: Wall Street is losing its mind over the same old story
The way the market treated US Silica, Emerge Energy, and Hi-Crush Partners in September, you'd have thought that their business models had failed and they had slashed or even suspended their payouts. The truth is far less exciting, with cratering prices resulting from similar factors we've seen since the start of the oil crash. This includes analyst downgrades resulting from short-term industry concerns, and a surprise distribution guidance announcement that comes as a surprise to no one who's been paying attention to the last few earnings announcements.

In my opinion, frack sand producers continue to have a positive long-term outlook, though their prices may prove extremely volatile over the next few years. That's especially true since Emerge, U.S. Silica, and Hi-Crush Partners payouts face the ongoing threat of cuts or even outright suspensions until oil and frack sand prices recover. However investors who are willing to be patient and dollar-cost average at today's super low prices might do very well in the coming years.