Please ensure Javascript is enabled for purposes of website accessibility
Free Article Join Over 1 Million Premium Members And Get More In-Depth Stock Guidance and Research
By George Budwell - Oct 17, 2015 at 7:03AM

Peregrine Pharmaceuticals' stock had a rough September. Should investors take advantage of this pullback to add this speculative biopharma to their portfolios? 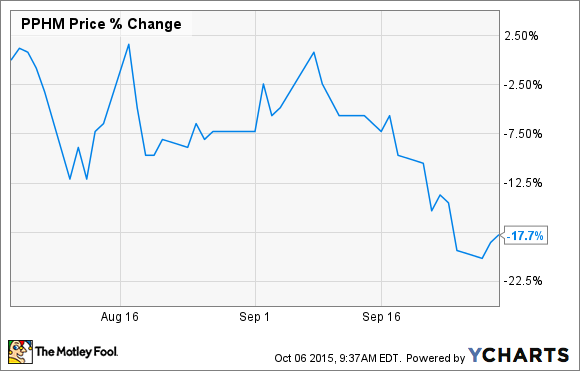 What: Peregrine Pharmaceuticals (NASDAQ: PPHM), a clinical-stage biopharma specializing in the development of monoclonal antibodies to treat cancer, saw its shares slip by almost 18% in September based on data from S&P Capital IQ. The good news is that this sell-off wasn't triggered by a specific negative regulatory or clinical catalyst.

Instead, I think this double-digit drop is best explained by the widespread drop across the healthcare sector that stung small-cap companies particularly hard. According to finviz.com, for instance, 74.6% of all small-cap healthcare stocks declined in September.

So what: My hunch is that the market soured on small-cap healthcare companies in general last month because they tend to be cash flow-negative and heavily dependent on stock sales to fund their ongoing operations. And Peregrine is no exception in this regard.

After all, Peregrine lost $15.1 million, or $0.08 per share, in the first quarter of its fiscal year 2016, which it reported last month. Complicating matters, the company ended the quarter with less than $60 million in cash and cash equivalents -- strongly hinting that another capital raise is coming down the pike.

Now what: While Peregrine's contract manufacturing subsidiary Avid Bioservices reportedly has a $42 million backlog in existing customers, Wall Street thinks the company's ongoing late-stage study for bavituximab, as a second-line non-small cell lung cancer treatment, will widen the company's net loss per share by another 23% next year.

As this event-driven pivotal trial may not produce top-line results until the end of 2016 or early 2017, Peregrine clearly has a long road ahead of it before reaching the promised land of an approved market. As such, investors may want to hold off on buying this small-cap drugmaker's shares for the time being.