T-Mobile (NASDAQ:TMUS) has been on an epic run over the past couple of years, scoring new subscribers from the other three major carriers hand over fist. The Un-carrier's success hit a new peak recently when it overtook Sprint (NYSE:S) in total subscribers to officially become the No. 3 carrier in the United States. But don't expect John Legere to slow down -- T-Mobile's momentum isn't likely to go away anytime soon.

Directional data
MoffettNathanson analyst Craig Moffett has put out a new research note predicting that T-Mobile crushed the competition in the third quarter. Moffett crunched numbers from researcher Comlinkdata, which uses natural language processing algorithms to analyze social media data streams in an effort to gauge consumer activity and opinions about carriers. Comlinkdata not only picks up on whether people say they switch, but also on why they switched.

Naturally, this type of data is inherently limited. Not everyone goes and tweets about switching carriers after doing so, even though Legere encourages it with various hashtags. Yet there is some directionally relevant data that can signal a carrier's momentum, even if social media indications aren't going to give specific figures. 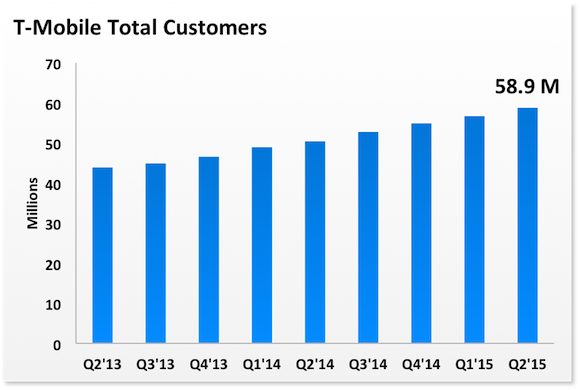 T-Mobile continues to grow its customer base. Source: SEC filings.

Moffett looks at the difference between people saying they are switching to and from various carriers to gauge this momentum and believes that T-Mobile's roll is set to continue. It's currently iPhone season, and T-Mobile has structured its new Jump! On Demand leasing program very favorably for consumers, offering the latest model for just $5 per month with an eligible trade-in. Sprint quickly undercut T-Mobile with a $1-per-month offer with an eligible trade in, but the now No. 4 carrier isn't enjoying the type of momentum T-Mobile is.

At an investor conference in September, Legere already confirmed that in the third quarter T-Mobile had already exceeded the total number of net customer additions that it posted in the second quarter, and this was before the iPhone launched. T-Mobile added 2.1 million customers in the second quarter. Overall, Moffett is modeling for T-Mobile to add roughly 1.8 million customers in the third quarter.

There's more where that came from
T-Mobile has been extremely aggressive with winning over customers through a combination of new plan structures, features, and heavy promotions. Without a doubt, those promotions are pricey. Promotional expenses are included in selling, general, and administrative expenses, which jumped 13% last quarter to $2.4 billion in total.

But to the extent that T-Mobile can build a loyal customer base that sticks around, those costs will be well worth the investment. The Un-carrier has a long way to go before it's within spitting distance of the two largest carriers, but it's absolutely heading the right way.