Please ensure Javascript is enabled for purposes of website accessibility
Log In Help Join The Motley Fool
Free Article Join Over 1 Million Premium Members And Get More In-Depth Stock Guidance and Research
By Reuben Gregg Brewer - Oct 18, 2015 at 11:15AM

Oil companies aren't the only ones taking a hit from the commodities troubles. Here are a couple of industrial giants that are hurting, too

It's not hard to connect the dots between the decline in prices over the past year and the prospects of oil and gas companies. They aren't the only ones that have suffered, though, as it's also bad news for some other companies that you might not expect. Take industrial powerhouses Emerson Electric Co. (NYSE: EMR) and ABB Ltd. (ADR) (NYSE: ABB), for example.

A big drop
The first thing you have to understand about oil's fall is the scale. Prices were over $100 a barrel in the middle of 2014 and recently they've been trading at half that, or less. That's a massive drop that's pushed some drillers to the brink of solvency. But the bigger issue is that drill rigs, particularly in the U.S. market, have been increasingly put in storage. So there's less demand for a host of oil industry goods. And that's why Emerson and ABB are feeling the drop, too.

Emerson Electric makes a huge array of products, but one of its big customers is the oil and gas industry. It's process management business, roughly a third of revenues, provides controls and measurement equipment to the oil business, among others. In the company's fiscal third quarter earnings slides, Emerson explained that one of the reasons this segment's revenues were down 10% year over year was that "oil and gas capital spending remained weak as a result of lower oil prices."

But that's not the only segment that's exposed to oil. Industrial automation, which you might not think had anything to do with oil, saw sales fall a whopping 23% year over year in the third quarter. Why? "Third-quarter sales reflected continued softness in European demand, upstream oil and gas, and industrial spending, specifically in energy-related and commodity markets." In other words, low oil prices are hitting Emerson pretty hard across more than one of its businesses.

Friends in low places
But Emerson isn't alone. ABB has also been taking some lumps from oil's malaise. In the company's second-quarter earnings release CEO Ulrich Spiesshofer explained, "As anticipated, our order development reflects a tougher market environment and weaker demand in oil and gas." New orders were down 4% year over year. But that's actually a 15% decline when translated into U.S. dollars.

That may not sound too bad, and perhaps it isn't, but new orders are a rough predictor of future results. If new business is falling, how is the company to going to keep its top line growing? And one of the big culprits: low oil prices. And in what appears to be a candidate for obvious statement of the year, the company noted, "Current oil prices ... are expected to continue to influence the company's results."

A lengthy headwind
Are low oil prices going to push Emerson or ABB into financial distress? No. But they will likely make meeting near-term financial goals a lot harder. And the pain may last longer than you think, even if oil prices start to stabilize. For example, Emerson notes, "Demand is expected to remain weak through at least the first half of fiscal 2016; given the continued downward trend in commodity prices a significant recovery will not be felt until 2017."

Now that statement was specific to the process management division, but Emerson is basically telling investors that oil prices will remain a headwind through the rest of this year and all of next year. I'd expect the same at ABB. 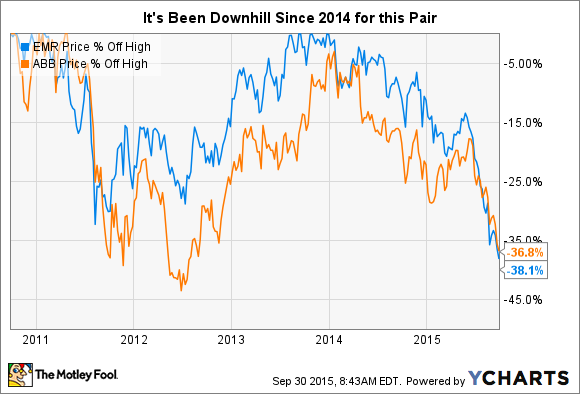 This too shall pass
At the end of the day, ABB and Emerson are still solid and highly diversified industrial companies. But clearly oil's reach expands well beyond the oil companies you'd expect to feel the pain of falling commodity prices. And that pain looks like it's going to last if Emerson's projections are even close to correct.

If you own or are watching either of these companies, you'll want to take a closer look at how falling oil prices are hampering their businesses. You may ultimately decide that current price weakness is a great buying opportunity. However, you might also decide that you want to wait to see how the oil industry's pain plays out before doing anything.