Currencies are often just as volatile as commodities, and you've probably been reading about how U.S. companies with overseas revenues are facing top- and bottom-line headwinds from a strong U.S. dollar. But iron ore giant Vale SA (ADR) (NYSE:VALE) isn't a U.S. company, and the Brazilian real's depreciation versus the dollar is likely to make this miner more competitive over the near term. Here's how.

A strong dollar
Take a quick look at the earnings of any multinational U.S. company, and the pain of a strong dollar is pretty evident. For example, Procter & Gamble Co.  with operations that span the globe, saw net revenues decline 5% year over year in the second quarter. However, that was driven by a 6-percentage-point impact from currency headwinds. Do the math and you'll see that net revenues were up 1% if you pull out the impact of currency changes. To be fair, P&G isn't in the same line of work as Vale, but it's a name you've heard of and shows just how big a deal currency changes can be to a company's business.

So, with a strong dollar, it's more expensive for companies to buy U.S. goods. But what if you switch that equation up a little bit? For example, if a company that makes most of what it sells in a country with a relatively weak currency but sells most of its products in dollars, it suddenly has an edge. That's because its production costs are falling with the value of its home currency. 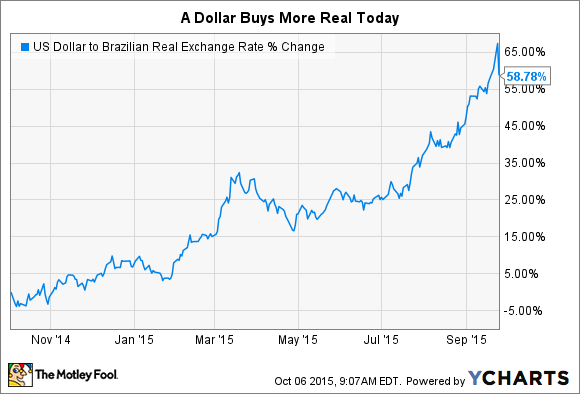 US Dollar to Brazilian Real Exchange Rate data by YCharts

The Brazilian real
This is where Vale comes in. The giant iron ore miner is based out of Brazil. That country's currency, the real, has been weak relative to the the U.S. dollar all year.

Now, you need to be aware that there are other factors going on in this equation. For example, there's the not-so-subtle issue of political turmoil in Brazil that's threatening the standing of the country's president. Asia is a huge market for the country, so slowing growth in China has taken a bite out of demand for Brazil's exports. And, more specific to Vale, a global oversupply of iron ore has kept the steelmaking input's price in a moribund state. So the country's currency shifts aren't occurring in a vacuum.

But it's still interesting to see the impact the weak real is having on Vale's results. According to the company's second-quarter earnings release: "After adjusting for the effects of higher sales volumes, costs decreased by US$342 million in 2Q15 vs. 1Q15. The cost reductions were mostly driven by the depreciation of the [Brazilian real] against the USD and by the positive results of cost reduction initiatives."

That's a one-two punch on the cost side of things. Like all miners, the commodity downturn has pushed Vale into penny-pinching mode. So it has been working hard to trim costs. But then you add in the fact that it gets to pay its workers in reals but sell its products in dollars, and there's even more savings on the cost front. Vale is already one of the lowest-cost iron ore miners in the world, and now it has another lever working for it on the cost side.

Moreover, since it doesn't look like the Brazilian real is heading higher anytime soon, Vale is likely to benefit from this cost advantage for at least a little while longer. And that's good news, because Vale has been upping its iron ore production by opening new, low cost mines. Bringing on new volume would normally be a bad thing in an oversupplied market -- that is, unless you have the opportunity to undercut the competition on price. Which, as it turns out, Vale does.

That said, nothing happens in a vacuum. Much of Vale's debt is denominated in U.S. dollars. So the miner's interest costs will be higher even as its production costs fall. But the benefit of a weak real should be larger than the negative of increased dollar-based interest costs.

A long trip
So when you're looking at Vale, take a closer look at the impact of currency shifts on its cost structure. You can't call it a durable competitive advantage, but a weak real has certainly been providing some worthwhile benefits of late. And unless the real suddenly rockets higher, an unlikely scenario, Vale's already strong competitive position could become even stronger.