Square's innovative card reader was the first, but it won't be the last. Image source: Square.

As an avid tech watcher, I'm always intrigued by disruptive new technologies. As such, I've been watching Square for years following its launch in 2009 and have long passively entertained the idea of investing in Square should the chance ever arise. The start-up just had such an innovative idea -- enable anyone to accept credit card payments through the headphone jack of a smartphone -- that it came as no surprise when armies of small local vendors began adopting the payments platform to process payments. Oh, and the card reader is free? Sounds like a no-brainer.

A souring story
It didn't help when The Wall Street Journal reported in early 2014 that Square's losses were widening and it was running out of cash, so Square was discussing possible deals to sell itself to a larger company. Potential suitors were a who's who of Silicon Valley tech giants.

Another bad sign was that after quickly jumping to a $5 billion valuation by January 2014, the company was valued at $6 billion later that year in another round of funding. That change represented a fairly modest increase in the world of start-ups, and suggests that Square was unable to secure more favorable funding terms with private investors due to slowing growth.

Square's thin cut
Square's business model has always been to be an intermediary between payment processors and sellers. This isn't news. But what is new are detailed financials surrounding the business. Square charges a fairly standard 2.75% fixed fee for transactions that it processes, or 3.5% plus 15 cents for manually entered transactions (card-not-present transactions). It then turns around and promises prompt deposit into the seller's bank account.

But behind the scenes, Square relies on its own Acquiring Processor that is an intermediary to the card networks and issuing banks. Take a look at this chart within the S-1 that lays out each step of the payment process. 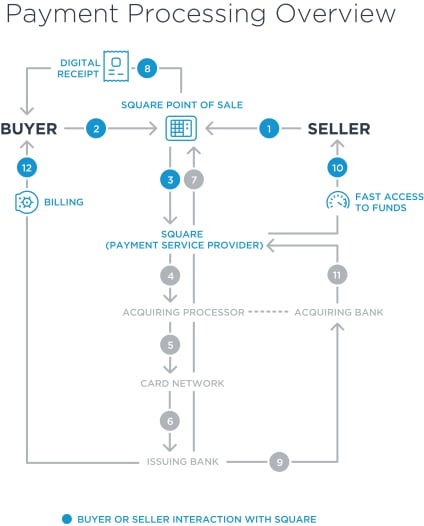 So what's the spread between what Square collects and what Square has to pay out on the back end to the processors, networks, and banks? The company pays "a small fixed fee per transaction to the Acquiring Processor," assessment fees that are about 15 basis points of the transaction amount to the card network, and then an interchange fee to the issuing bank that ranges between 1.5% to 2%. It also has a "very small fee" for each ACH transfer when it credits the seller's bank account.

After everything is said and done, here's how to calculate Square's net spread over the past few years.

So Square keeps about 1% and change of all payments processed. That's a pretty thin cut that the company gets to keep for itself, and it's also before operating expenses come into play.

Put another way, Square doesn't occupy a large portion of the payments value chain, nor does it have much of a defensible position considering increased competition. It would be encouraging if Square expanded its presence within the value chain, perhaps by acquiring an Acquiring Processor (it's not as if it can acquire a card network or issuing bank).

But that would make its business vastly more complicated, and the company isn't really in a position to be funding major acquisitions right about now. And even then, the real value in the payments chain would still be held by card networks and issuing banks.

Competition is coming
Speaking of increased competition and a narrow moat, larger rivals have been coming directly after Square for quite some time. The two most prominent are PayPal (NASDAQ:PYPL) and Intuit (NASDAQ:INTU).

Both companies launched card readers (PayPal Here and Intuit GoPayment, respectively) way back in 2012 that exactly replicate Square's value proposition to local merchants. PayPal and Intuit are much larger and far better funded than Square, especially in light of Square's cash burn (operating cash flow was negative $109.4 million in 2014).

And now that PayPal is a separate entity, the company can truly focus on taking down the competition. For reference, PayPal processed $67.5 billion in payments volume last quarter alone. On top of that, PayPal has a significant international presence (over 190 countries and over 20 currencies), while Square only accepts payments in the U.S., Canada, and Japan.

Square has also been moving upmarket in terms of sellers and cross-sell opportunities. The company now tries to sell merchants on various value-added services and financial software applications that they can use to better run their businesses. But that also just so happens to be Intuit's realm of expertise.

Intuit has a much better value proposition in terms of financial and accounting software. Image source: Intuit.

Since the beginning of time, Intuit has been the market leader for financial and accounting software and value-added services. In a way, Square is trying to become Intuit before Intuit can become Square. Except the problem with that equation is that Intuit is at a distinct asymmetrical advantage. It's much easier to replicate a small hardware dongle than it is to replicate complex financial software. In the long-term, the odds are in Intuit's favor.

The upside is limited
Square has made a name for itself among small and local businesses and merchants. But this market segment is a relative niche in the broader payments industry, and it's unclear whether or not Square can successfully move upmarket. Larger companies will build and implement their own payments infrastructure without needing Square. Square is not catered to large enterprises, and has exhibited difficulty in scaling to those volumes. Just look at its disastrous deal with Starbucks.

In the S-1, Square notes that "the transition to card payments is occurring rapidly," which is about as obvious as the clear blue sky's hue. Citing a Nilson Report, 30% of domestic purchases in 2013 were made with a paper check. Square also says that over half of private sector output is generated by local businesses. These statistics are not questionable, but what is questionable is Square's ability to address these needs better than the competition, especially considering its handicap when it comes to larger businesses.

At the same time, no one is doubting the impressive growth rates that Square has put up over the past few years. GPV and transaction revenue have been jumping at a healthy clip, but it's the longer-term picture that concerns me. Can Square sustain these types of growth rates in the 5 or 10 years to come?

Always have an exit strategy
The growth in Square's private valuations in 2014 were fairly modest, which also suggests that it's become increasingly tenuous for the private market to buy what Square is selling. Otherwise, Square wouldn't have much trouble raising funds at higher and higher valuations. As of last quarter, Square had $198 million in cash and equivalents on the balance sheet, which comes after raising $150 million in fresh capital (at a $6 billion valuation) almost exactly a year ago.

But considering Square's cash burn, the company knows that it will need to keep raising cash, and if the private markets are drying up, it might as well go public. As a public investor, therein lies the rub. While IPOs are often a chance for public investors to get in on the ground floor of something great, they are also sometimes an exit strategy for early backers and venture capitalists. I suspect that Square is the latter.

Of course, all VCs hope to take start-ups public as a pay day, but it depends on how viable the company is going forward that should really matter to public investors. I don't know about you, but I don't like being someone else's exit strategy.