The energy infrastructure giant is expected to report third-quarter results on Oct. 21 after markets close.

Kinder Morgan (KMI 1.87%) is on deck to report its third-quarter results after markets close on Wednesday. The energy infrastructure giant isn't expected to drop any real surprises on investors given the fact that 96% of its cash flow this year is either fee-based or hedged, meaning its quarterly results are pretty much locked in. That being said, there are still a few areas investors should keep a close eye on this quarter.

First review
Before we get to those, let's take a quick peek back at last quarter. Here's a chart showing how the company's segment results last quarter compared to those in the second quarter of last year. 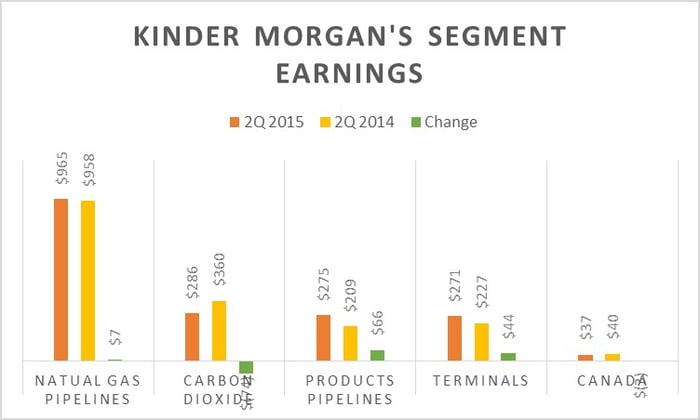 From that chart we can see that the company saw solid results in its core natural gas pipelines segment and strong growth in both its products pipelines and terminals segments, which all helped to offset some weakness in its carbon dioxide and Canada segments. These solid segment results fueled $1.095 billion, or $0.50 per share, in distributable cash flow for the company. That was just enough to cover the company's $0.49 per share dividend.

Investors should not be alarmed to see this happen after CFO Kimberly Dang reminded investors on the company's second-quarter conference call, "We told you we thought in the second quarter we might have [a deficit]. You can see we ended up on the good side of that equation." But she then warned, "The third quarter will be tight." That warning is important because if Kinder Morgan reports a shortfall it could cause some concern in the market that the dividend might not be safe. While it is a warning sign, it is not something that investors should get too worked up over because the company expects a much stronger showing in its seasonally strong fourth quarter to more than cover any shortfall.

2. Watch for changes to its outlook
Speaking of the fourth quarter, investors should keep an eye on any challenges the company sees on the horizon with meeting its budgeted growth targets. As of the end of the second quarter the company had the following growth expectations for its operating segments:

Keep a close eye on the terminals, carbon dioxide, and Canada as each has some headwinds to overcome. For terminals, it's the continued weakness in the steel markets and coal volumes, for carbon dioxide its oil prices, and for Canada it's the weak Canadian dollar. Any further weakness could have had an impact not just on distributable cash flow in the third quarter, but also on the company's outlook for hitting its full-year growth targets.

3. Watch for this change to its backlog
Kinder Morgan's main value proposition is a dividend that is not only currently very robust, but one it expects to grow by 10% per year through 2020. The foundation of that growth is the company's project backlog that currently stands at $22 billion. Investors will want to see that backlog grow even larger during the third quarter because it would further solidify the company's ability to hit its long-term dividend growth target.

Last quarter the company added a very important new project to that backlog, which is the $3.3 billion market path of its Northeast Energy Direct natural gas pipeline project. What we're watching for this quarter is for an announcement that the company added the other half of that project, which is the supply path. It would link producers in the natural-gas-rich Marcellus shale to end-users in New England. The reason this backlog addition is a possibility this quarter is due to an announcement the company made toward the end of September when it said that it had secured additional gas capacity agreements for the project by signing up 627,000 dekatherms per day of capacity. That might be enough to move the project from concept to the commercially secured backlog.

Investor takeaway
The expectation is that Kinder Morgan will report a solid quarter, though not nearly as strong as prior quarters. While the company is facing some tough headwinds, the fact of the matter remains that the bulk of Kinder Morgan's cash flow is secured by fee-based assets, which really help to mitigate those headwinds. Further, the company has a very robust backlog of commercially secured, fee-based projects that really underpin its growth.