Bank of Internet USA made a name for itself by being the foremost branchless bank in America. Photo: BofI.

Think you had a tough time last week? Try being an investor at BofI Holdings (NYSE:AX), better known as The Bank of the Internet.

Following the filing of a whistleblower lawsuit by a former auditor on Wednesday, the stock fell 30%. The company held a conference call that night to address the situation, and the stock jumped 20% on Thursday. On Friday, however, the bears once again ruled, with the stock trading down another 15%.

Just last month, I talked about why I was taking a pass on BofI stock; In a nutshell, there was just too much potential for hidden risk to wipe out the stock's gains. Though last week's price moves don't conclusively prove my thesis correct, they do highlight the types of risks investors take when they invest with this management team.

Below, I'll go through the individual complaints lobbed at the company by the former auditor, Matt Erhart, and how the company responded to them. I'll finish with a summary of what I plan to do with this new information.

A litany of complaints

Technically, the complaint filed by Erhart's lawyer in California has to do with retaliation and wrongful termination of employment for someone with whistleblower status. The meat of the story, however, isn't the wrongful termination, but the information that Erhart said that he dug up during his time at BofI as a junior auditor.

To get a clear picture for where all of the allegations stand, I've compiled a list of the complaints that management spent time refuting on the company's conference call .

I find that the company's response for most of these complaints make sense (though I don't think the point about money laundering was adequately rebutted). But there's a larger problem that I am beginning to sense, and it has to do with the culture of opacity at the company.

Among these alleged wrongdoings:

It is not the individual accusations of wrongdoing that concern me here—accidents happen at any bank. Instead, it is the alleged response of management to essentially cover this information up that gives me pause.

Already cleared by regulators
In the end, BofI bulls have a strong argument sitting in their back pocket. Over the past year, BofI was under scrutiny by federal agencies looking to approve an acquisition that BofI was making from H&R Block. Erhart has been clear that he shared these concerns with regulators. In the end, the transaction was approved, and BofI was cleared.

There's no way to know, however, if regulators simply missed something, or weren't given the correct information. Indeed, Erhart wasn't the only auditor to leave the company during the past year. His direct boss, John Ball, also left the company.

In the complaint, Erhart claims that Ball, "resigned abruptly after refusing an order from CEO Garrabrants to engage in what Mr. Ball reasonably viewed to be unlawful conduct to cover up the bank's wrongdoing ."

Garrabrants had a difficult time explaining the circumstances surrounding Ball's departure on the conference call. The vague picture that he painted was that Ball had grown tired of overseeing Erhart, and was frustrated when the company refused to fire Erhart at Ball's urging.

On Thursday, however, The New York Times offered a very different view of the situation. The paper said that a person close to the situation who wished to remain anonymous "said [Ball] left Bank of Internet because of concerns about how the bank was responding to regulators...Ball believed Mr. Erhart's audit work to be excellent."

What this all comes down to
Without evidence of a smoking gun, what this really comes down to is a "he said, he said" type argument. I have a feeling that Erhart filed the suit not because he wants compensatory damages, but that he wants to force the company's executives to testify under oath.

Sans that taking place, the question that investors are left to ask is simple: Who do you trust?

If you trust management, then the stock is a pretty good buy at today's prices. If, however, you think Erhart is providing an account that's far too detailed not to have at least some truth to it, the stock's price could well continue to fall.

In the end, I'm not sure if Erhart is totally believable, but I do know that I have absolutely no interest in investing money with Garrabrants. I've found him to be combative and belligerent over the past year.

I find all of these statements to be very unbecoming of a CEO of a publicly traded company, with the last one being a particularly odd attempt at visual humor. If the bank truly is an "earnings juggernaut," then let the results speak for themselves, instead of hyping up investors' interest and then stating that they'll have to wait until the end of the month before getting actual numbers to review.

But this type of behavior matches up well with the reviews that the company gets from its own employees on Glassdoor.com.

Here's generally how the company fares: 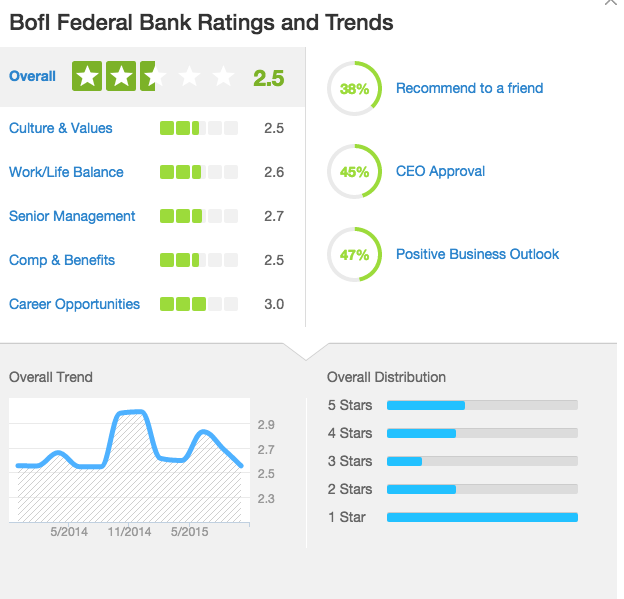 These are very low scores across the board, with less than half of all employees having a favorable outlook for the company, being willing to recommend the company to a friend, or approving of the job that Garrabrants is doing.

Again, there's no smoking gun here -- BofI could be completely faultless. But when all of the individual puzzle pieces are put together, I simply think that there's too much uncertainty and opacity for this to be a wise investment with my own money.

Obviously, every investor needs to make the best decision for him/herself. Hopefully, this information will help you make an informed one.