While Harley-Davidson (NYSE:HOG) is easily one of the most recognizable and successful brand names in America, the third quarter was clearly a disappointment for investors in the motorcycle manufacturer, with shares trading as much as 15% lower in early trading Tuesday. Harley faced increased competition and challenging foreign currency exchange headwinds, which caused declines in market share and net income. Let's dig into the details and better understand how bad the third quarter really was.

By the numbers
Starting from the top: Harley-Davidson's U.S. retail sales declined 2.5% in the third quarter compared to last year, which was partially offset by a sales gain internationally of 0.9%; that equated to a 1.4% sales decline worldwide to 72,178 units. Furthermore, while revenue from motorcycles and related products rose a meager 0.9% to $1.14 billion -- thanks to a 5.5% increase in shipments, despite weaker retail sales -- it fell short of analyst estimates of $1.21 billion.

Harley-Davidson's average motorcycle revenue per unit decreased $899 compared to last year's third quarter, driven by unfavorable currency exchange and a less lucrative product mix. The challenging business environment contributed to a 6.5% decline in net income, down to 140.3 million. Earnings per share checked in at $0.69, which was flat compared to last year's third quarter but fell far short of analyst estimates of $0.78 per share.

While financial numbers certainly fell short of expectations, one of the red flags in the third-quarter presentation was Harley-Davidson's market share.

Due to ongoing and aggressive price discounting from competition, as well as new product introductions from competitors in the U.S. market, Harley's U.S. new 601+ CC (heavyweight motorcycle) retail market share fell from 56.3% during last year's third quarter to 52.4% -- a 390 basis-point decline, or 3.9 percentage points. For additional context, here's how Harley's year-to-date market share looks when compared to recent history. 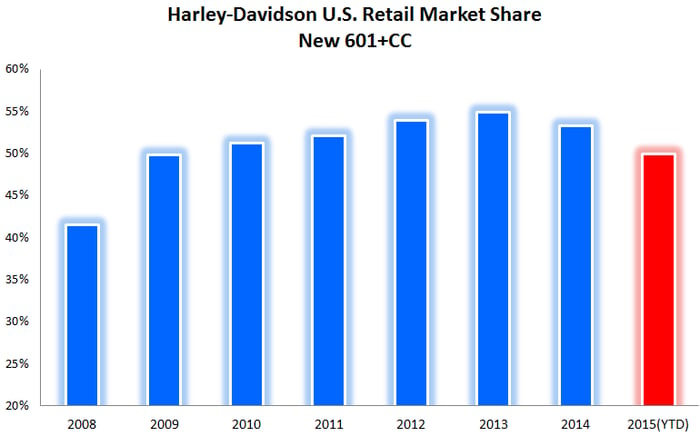 Silver lining
While market share, gross margins, and net income all declined in the third quarter, there was a silver lining for investors: Harley-Davidson continues to return value to shareholders through increased dividends and share repurchases.

In fact, Harley-Davidson's five-year compound annual growth rate for its dividend is an impressive 29%, moving from $0.40 per share annually in 2010 to $1.10 in 2014. The company's large increase in share repurchases this year is expected to be slightly accretive to 2015 earnings per share, but management expects the full benefit to be reflected in 2016 earnings-per-share figures.

The road ahead
Because management expects headwinds and the challenging environment to persist through the end of 2015, full-year motorcycle shipment guidance was moved lower, to 265,000-270,000 -- that's roughly flat to about 2% lower compared to 2014 and down from the previous guidance of 276,000-281,000.

Management also noted that the company would incur expenses between $30 million and $35 million during the fourth quarter due to employee layoffs and reorganization costs.

"We expect a heightened competitive environment to continue for the foreseeable future, and now is the time for us to dial things up with significant additional investments in marketing and product development," said Matt Levatich, Harley-Davidson's president and chief executive officer, in a press release.

There isn't a quick fix for Harley-Davidson investors, and going forward, management plans to increase product and brand awareness through increased advertising, grow new ridership in the U.S. market through its rider training programs, and open 150 to 200 dealerships globally by 2020 to try to stoke growth for investors -- but that's a game plan that is likely to take three to five years to gain significant traction.