Investing in MercadoLibre nowadays could be like investing in Amazon, eBay, and PayPal 10 years ago. 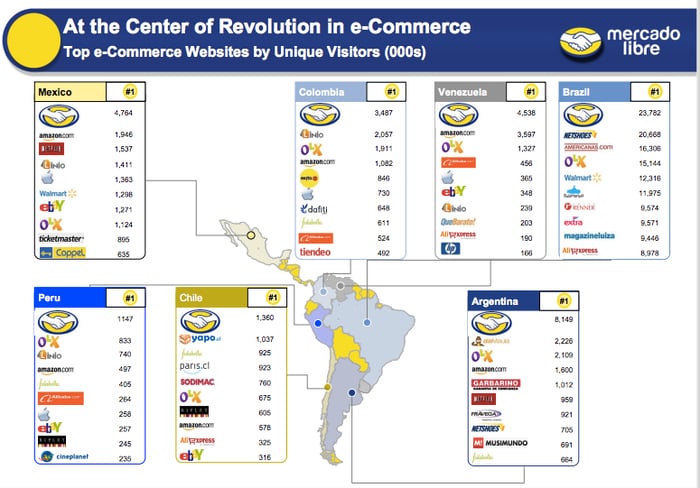 MercadoLibre ( MELI 6.25% ) is usually referred to as the eBay ( EBAY 1.51% ) of Latin America. This is for good reasons, since there are many similarities between MercadoLibre and eBay, not only the marketplace segment, but also the recently separated PayPal ( PYPL 3.15% ) digital payments business.

However, MercadoLibre has one big advantage over eBay: The company does not need to compete against almighty Amazon ( AMZN 2.63% ) to the same degree, and this allows MercadoLibre to enjoy big profitability and  extraordinary growth potential over the coming years.

MercadoLibre is a commerce facilitator, matching buyers and sellers and making a commission for every transaction. Many bricks-and-mortar retailers find in MercadoLibre a potential partner to expand their online presence, in stark contrast with Amazon, which is mostly seen as a dreaded competitor by traditional retailers around the world. MercadoLibre offers e-commerce solutions to small businesses and power sellers, and it's also expanding its relationship with big traditional retail brands.

MercadoPago plays a similar role for MercadoLibre as PayPal used to do for eBay. It's not only a popular payments method facilitating transactions inside the company's e-commerce platform, but also a growing business on its own merits -- and rapidly expanding beyond MercadoLibre's marketplace.

Based on data from the second quarter, MercadoPago accounts for 57% on the company's marketplace business, and penetration levels are as high as 90% in Brazil, MercadoLibre's biggest market. Even more impressive, MercadoPago's non-marketplace revenues grew by a staggering 52% in U.S. dollars, and by a stronger 108% in local currencies last quarter, so the platform is rapidly gaining steam on a stand-alone basis.

In the U.S. market, Amazon is the growth leader, with constant-currency sales rising 27% year over year during the second quarter. On the other hand, since Amazon sells its products for aggressively low prices and is investing tons of money for growth, the company generates minuscule and volatile profit margins.

eBay, on the other hand, is expecting sales in its marketplace division to increase by a much smaller 3% to 5% on a currency-neutral basis during 2015. However, eBay's business model is remarkably profitable, producing a segment operating margin of 35.8% last quarter.

MercadoLibre offers the best of both worlds. Net revenues excluding Venezuela grew 28.9% in U.S. dollars and 61.1% in local currencies during the second quarter. While profit margins are under pressure because of currency headwinds and increased spending, the company still retained  22.4% of revenue as operating profit last quarter. In addition, the MercadoPago division is clearly firing on all cylinders and offering enormous room for growth over the long term.

On risk and opportunity
E-commerce currently represents only 2.1% of retail transactions in Latin America, while 7.4% of retail purchases in the U.S. are being done online. This shows that MercadoLibre offers enormous room for growth as the undisputed leader in a remarkably promising market. In a sense, we could say that investing in MercadoLibre nowadays would be similar to investing in Amazon, eBay, and PayPal a decade ago.

None of this means the company is exempt from risks. Far from that -- big markets such as Brazil, Argentina, and Venezuela are going through significant economic turmoil lately, their currencies are depreciating, and economic growth rates are decelerating. This is clearly having a negative impact on MercadoLibre's financials, especially when translated to U.S. dollars.

The good news is that many of these risks are already reflected in MercadoLibre's valuation. Because of economic jitters in Latin America, the stock is down by 37% from its highs of the last 12 months, trading at a forward P/E ratio of around 31 times earnings estimates for the coming year. While this is a premium versus the overall market, it's still a very reasonable valuation for such a promising growth company.

For investors who have enough risk tolerance to withstand the uncertainty coming from Latin American economies in the short term, MercadoLibre is offering a unique opportunity to profit from amazing growth prospects over the years ahead.