Stratasys (NASDAQ:SSYS) blindsided investors after the market closed on Thursday with a warning that its third-quarter earnings are going to fall significantly lower than it previously guided. Shares of Stratasys and 3D Systems (NYSE:DDD) were both trading significantly lower during Friday's trading session: After opening down 19%, Stratasys is down more than 12% as of this writing; 3D Systems has fallen nearly 11%.

Stratasys' underlying premise for the shortfall is a continuation of trends it's previously cited. During 2013 and 2014, the 3D printing industry experienced tremendous growth -- Stratasys included -- and it created an oversupply of 3D-printing capacity in the marketplace. This has prompted existing customers to utilize their excess capacity on hand, rather than purchasing additional 3D printers, which in turn, has reduced demand.

Management also announced that it "is in the process of performing a goodwill impairment analysis for its other reporting units, which may result in additional impairment charges." This suggests that Stratasys' growth-by-acquisition strategy could be failing to produce the returns necessary to justify the acquisition values it maintains for them on its balance sheet.

Perhaps this may come as a surprise, but at the close of the second quarter, Stratasys held more goodwill and intangible assets on its balance sheet that could be subjected to impairment than 3D Systems -- the company that's gained a reputation for being a serial acquirer. Technically, Stratasys has more to lose from taking writedowns on previous acquisitions it's made than 3D Systems: 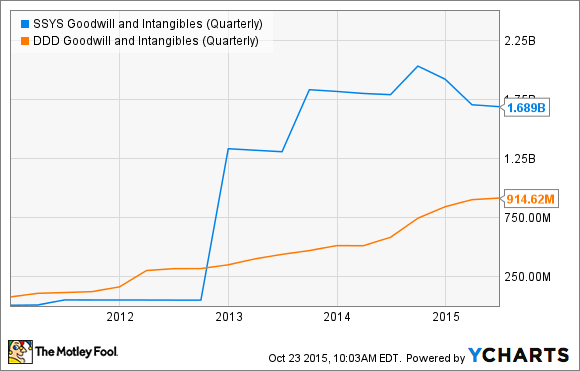 Management's two cents
In the press release, Stratasys CEO David Reis expressed his disappointment with its third-quarter results, but maintained that the company remains "convinced of the long-term growth opportunity within 3D printing." Unfortunately, Reis didn't substantiate this claim any further, but hinted at a possible change to its operating structure and operating costs to compensate for the headwinds and ensure it's well positioned for the long term:

We will continue to make the adjustments to our structure and operating costs in light of market conditions, but we are moving forward with the longer-term initiatives that we believe will help position our company for future growth, including enhancements to our go-to-market strategy and aggressive investments around new product development.

Looking ahead
The warning that management may have to take future writedowns from units it's acquired other than MakerBot implies that management has a low degree of confidence that its growth prospects will improve anytime soon. Investors may gain more clarity on Stratasys' growth prospects on Nov. 4 at 7:00 a.m. ET, when the company releases its final third-quarter earnings and hosts a conference call.

However, based on the preliminary release, it appears that the wheels attached to Stratasys' growth engine are showing signs of serious trouble, which could have greater implications for the industry at large. After all, Stratasys and 3D Systems share many of the same customers and often compete for the same business.

Ultimately, investors may want to temper their expectations for the entire sector. It doesn't look like we're out of the woods yet.