On the heels of two solid earnings reports earlier this year, perhaps Pandora Media (NYSE:P) investors had grown accustomed to the sweet sound of encouraging news in 2015. But the market's stunning response to the music-streaming specialist's latest quarterly results is perhaps best compared to nails on a chalkboard. When all was said and done Friday, shares of Pandora had fallen more than 35%.

Before we talk about why, let's take a closer look at what Pandora accomplished this quarter:

What happened with Pandora this quarter?

What management had to say
According to Pandora CEO Brian McAndrews, the purchase of Ticketfly "will be truly transformative, extending our long-standing strength in music discovery to the large and fast-growing world of live events."

Regarding the settlement, McAndrews extolled the virtues of striking such a deal: "With our pre-1972 settlement, we are continuing to strengthen our relationships across the music landscape by resolving a historic source of tension. This progress points to a greater opportunity to work collaboratively toward a bright future for music in a digital era, those who make it, and the fans who love it."

And on Apple Music, recall that three months ago McAndrews warned: "[W]ith any big launch like this, and the noise and things happening in the marketplace, there could be some listeners who experiment with the service and there could be some short-term impact. But we aren't seeing any meaningful listener impact at this time, and we don't expect any long-term meaningful impact, either."

Sure enough, he reminded investors during this quarter's conference call of that warning and then elaborated, "I am pleased to say that, given the scale of press and consumer attention on this launch, the impact on our active users and listening hours was muted and was, in fact, consistent with what we experienced during the launch of Apple's radio service in 2013." 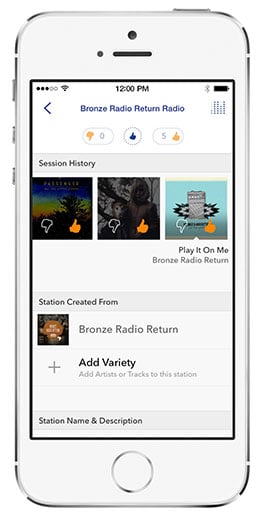 Looking forward
Pandora successfully staved off Apple's much more direct attack on its listener base with Apple Radio two years ago. But Apple CEO Tim Cook recently confirmed that 6.5 million of Apple Music's 15 million total users have already opted to pay for the $9.99-per-month service following the expiration of their free trials. What remains to be seen is just how sticky Apple Music turns out to be for those paying users over the long term, whether their numbers continue to grow, and even then, whether any defecting Pandora listeners will permanently abandon its largely ad-supported platform as a result.

In the meantime, however, Pandora now expects full-year 2015 revenue in the range of $1.153 billion to $1.158 billion, a reduction of $24.5 million from the midpoint of its previous guidance, and adjusted EBITDA of $51 million to $56 million, down from $75 million to $85 million previously.

Keeping in mind that guidance doesn't include expected sales from Ticketfly, Pandora CFO Mike Herring explained: "While our advertising revenue operations are operating at full strength, our expectation for hours growth year over year for the fourth quarter is 3%, limiting the inventory available to drive revenue to the previous range. We have chosen not to chase every dollar in the quarter and instead focus on high-quality monetization, executing on industry partnerships, and the integration of the Ticketfly business following the close of that acquisition."

While I can't blame investors for being nervous about Pandora's competitive position in the streaming-music landscape, I like its chances of success as an industry first-mover and current market leader. And while the settlement was big enough to raise some eyebrows, I also think it was a prudent move and a demonstration of good faith by management in the industry on which it depends to survive. I also think investors should be excited for the integration of Ticketfly, which should expand Pandora's reach and reduce its outsized reliance on advertising.

Finally, shareholders should keep in mind that shares of Pandora had risen almost 40% between last quarter's report and Thursday's close. So this decline merely brings Pandora stock within a stone's throw of levels not seen since mid-July. In the grand scheme of things, that's a relative single measure of notes compared with the long-term song on which patient Pandora investors should be focusing right now.