It's no secret that U.S. shale drilling is in a rough patch. Over the past 12 months, the amount of active rigs has been cut close to 60% over the past 18 months, and at current prices there isn't a whole lot of incentive to do more drilling. One set of companies that's really felt the pinch has been frack-sand suppliers. Without new wells to inject with sand, Wall Street has headed for the exits faster than if a building was on fire. 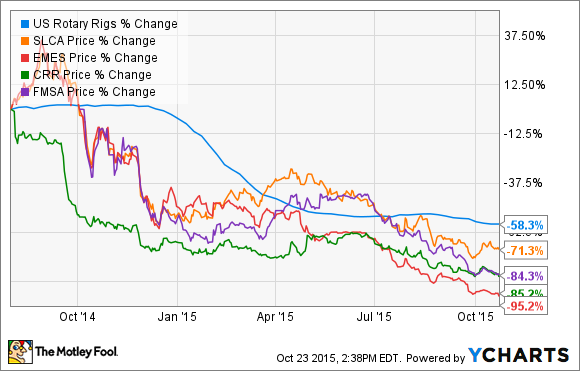 Just this week, Emerge Energy Services (NYSE: EMES) announced that it was suspending its dividend for at least this quarter, as the variable-rate MLP determined that it hadn't generated enough cash to pay its unitholders. Emerge is just one of the companies in this space that has investors nervous, though, as peer Fairmont Sandtrol (NYSE: FMSA) has a sizable debt load and Carbo Ceramics' (NYSE:CRR) ceramic proppants are losing ground to more traditional sand products for hydraulic fracturing. Of all the companies that have been pummeled by the decline in drilling activity, U.S. Silica (NYSE:SLCA) has held up the best -- although being the best-performing frack-sand producer today is like getting an award for being the best-behaved inmate in a federal prison.

So with oil prices down yet again and U.S. Silica about to report earnings, the are some questions as to how much more industry weakness the company can take before it starts to really strain the financial statements. Let's take a quick look at what kind of shape the company is in today and whether investors should brace for even more pain down the road.

I'm not dead yet
One gauge that the oil and gas industry has used for the health of frack-sand producers has been rig count. The theory is that the fewer rigs out there drilling, the less demand there is for frack sand. While that's true to a certain degree, it doesn't capture the whole story. One thing it neglects is that many wells have been drilled, but the fracturing process that requires sand has been put off until the price for oil picks back up. In North Dakota alone, there are more than 1,000 of these drilled but uncompleted wells. This lowers the immediate need for sand, but it's an inventory buildup that will require sand in the near future.

Another important component that it neglects is that the amount of sand used per well is skyrocketing. In the past four years, sand per well has almost doubled to nearly 8 million pounds per well, so just half the amount of wells are needed to maintain constant sand demand compared with a few years ago.

In reality, you can see this in U.S. Silica's results over the past couple of quarters. Yeah, revenue and earnings have declined as total sand delivered and the price per ton has declined. When you compare last quarter's 28% decline in revenue to the 58% decline in the U.S. active rig count over the same time period, though, U.S. Silica doesn't appear to be handling the situation too poorly.

Staying power
With so many companies that are tied to North American oil and gas production, the biggest concern is whether the company can ride out the storm financially until drilling activity picks back up again. U.S. Silica and others have been stashing cash over the past several quarters and have pretty large war chests to meet any short-term liquidity issues. As the following table illustrates, current ratios across the sector -- total current assets divided by current liabilities, and higher than 1.5 is normally good -- are pretty strong.

The one advantage U.S. Silica has over its peers in this regard, though, is that it has the most wiggle room in terms of both current assets as well as overall debt profile. With only $195 million in long-term debt on the books, the company isn't at a significant risk of being unable to pay off its loans compared with Fairmount, which has $1.3 billion in total debt outstanding.

The reason keeping a clean balance sheet is so important is that there aren't that many encouraging signs for increased U.S. drilling activity in the coming quarters. Many producers have seen operational cash flow whither on the vine, and current prices aren't that enticing to those that may want to go out and drill an oil or gas well. While there's a chance oil prices could rebound in the coming quarters, it's probably better to be more conservative with any U.S. drilling outlook until we see signs otherwise.

What a Fool believes
A few years ago, frack-sand suppliers were a pretty sexy investment. Growing shale activity and the ever-increasing amount of sand being stuffed down a well made it seem these were slam-dunk investments. However, with U.S. oil and gas activity looking weaker by the day, the prospects of these companies have taken a sharp turn for the worse. Of the frack-sand suppliers that have emerged as of late, U.S. Silica seems to be in the best shape to handle the market downturn from a financial standpoint. For an industry that doesn't have any catalysts going for it right now, that may be enough for someone to hang on to shares until better times come. U.S. Silica reports third-quarter earnings Tuesday. Oct. 27.