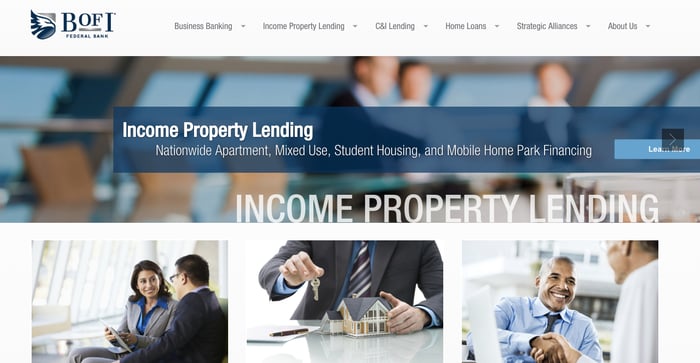 Under normal circumstances, investors in BofI Holdings (NYSE:AX) -- better known as "Bank of the Internet" -- should be ecstatic about this week's earnings release.

CEO Greg Garrabrants has already gone on record as saying that he "look[s] forward to reporting a strong record quarter that beats analyst expectations." When asked if he would buy his company stock at today's prices, he said, "Absolutely, I would and I am talking to legal counsel to see if I can get out of the blackout."

Those aren't the sort of comments you usually hear from CEOs of publicly traded companies, but they almost always lead to a nice bump in the stock's price. While that happened for BofI, the pop was short-lived. Overall, the company's stock is down over 15% since then.

It all comes down to trust

In mid-October, Matt Erhart, a former junior auditor for BofI, filed a complaint against BofI for wrongful termination while acting as a whistle-blower. The suit contained a number of allegations against BofI, and the company tackled the lion's share of the complaints in a subsequent conference call.

But BofI also sidestepped a number of allegations. I've investigated all that is publicly available, and there are four key questions that I, as an investor, would need to have answered before my full trust in management could be secured. I will be listening closely to the conference call to see whether management addresses these concerns head-on or avoids them altogether.

1. Did John Ball provide an explanation -- written, orally, or otherwise -- for why he left the company? If so, what was it?
This is a crucial part of Erhart's claim. John Ball was Erhart's immediate boss, and he left the company around the same time that Erhart did. As Erhart claimed, "Ball resigned abruptly after refusing an order from CEO Garrabrants to engage in what Mr. Ball reasonably viewed to be unlawful conduct to cover up the Bank's wrongdoing."

During the conference call, Garrabrants offered up an unclear, occasionally rambling response as to why Ball left. in the end, listeners were left with the impression that Ball was unhappy dealing with Erhart and that he was frustrated that management would not allow him to fire Erhart.

But The New York Times, citing a source close to Ball who didn't wish to be identified, offered a very different view. According to the source, Ball "left Bank of Internet because of concerns about how the bank was responding to regulators." Additionally, the source said, "Ball believed Mr. Erhart's audit work to be excellent."

If there are indeed two employees who left the bank because of these concerns, it would be crucial for investors to know about it.

2. Can you offer a full denial or explanation to the alleged history of unusual deposits into CEO Garrabrants' personal account?
This allegation is particularly alarming. As Erhart claims, "Garrabrants was depositing third-party checks for structured settlement annuity payments into a personal account, including nearly $100,000 in checks made payable to third parties." He further claims that this is a behavioral pattern that has had to be addressed in the past.

In the conference call, Garrabrants only opaquely addressed the concerns, saying, "He accuses me of money laundering, and questioned where money came from in certain accounts, when you can clearly see a Form 4 filed with that information."

Form 4s are used to inform the public, among other things, of when insiders purchase or sell shares of the company at which they are employed. While there are Form 4s on file regarding Garrabrants' compensation via stock ownership, I was unable to find anything explaining the deposit of third-party checks from structured annuities.

Garrabrants needs to offer a much clearer explanation to this allegation.

3. Can you offer a full denial or explanation to allegations that various members of your staff told Erhart and other employees to hide information from regulators?
In at least two instances, Erhart claims to have found wrongdoing on the part of the bank, but when he brought this to the attention of his superiors, he was told to hide that information.

This includes allegedly being told to cover up wrongdoings in connection with the company's annuity programs for California lottery winners and its since-canceled Global Cash Card business. According to Erhart, both senior vice president John Tolla and chief legal officer Eshel Bar-Adon told Erhart (and, at times, other employees) not to mention these alleged violations to regulators.

The actual violations themselves aren't terribly concerning, but the reported culture of opacity is alarming. In banking, trust is everything. If senior bank officials are taking this stance of obfuscation, it will surely shake shareholder confidence. This is why it needs to be directly addressed.

4. If you knew Erhart had confidential information in his possession, why did you wait seven months -- until after he filed his lawsuit and your stock precipitously dropped -- to take legal action against him?
Since Erhart filed his lawsuit, BofI has filed a countersuit. In it, the company claims that Erhart conducted a number of "rogue" audits and investigations. Furthermore, it claims that he obtained confidential and material non-public information and transferred that information to non-secure email addresses and distributed the information, in essence, to short-sellers.

The bank claims in its countersuit that "BofI executive management did not learn about Erhart's abuse of power, unapproved investigations and audits, and failure to perform his job duties, until on or about March 5, 2015." The company further claims that it sent a letter demanding that the information be turned over on May 12, 2015.

So why did it take so long for management to take action if such sensitive information was out there for others to see? Clearly, investors and depositors should have known about this situation sooner.

In any case, the company's conference call should be very interesting. For those who wish to tune in, it will be held on Oct. 29 at 4:30 p.m. EDT. You can listen in here.