Please ensure Javascript is enabled for purposes of website accessibility
Free Article Join Over 1 Million Premium Members And Get More In-Depth Stock Guidance and Research
By Jamal Carnette, CFA - Oct 27, 2015 at 11:00AM

Pandora lost as much as one-third of its value after reporting earnings. Is this due to Apple Music? 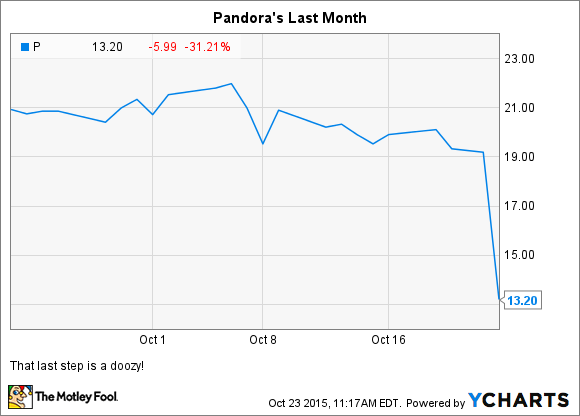 Thus far, earnings season has been good to technology companies. As companies from Silicon Valley and surrounding environs report, stock pops have been commonplace, as analyst estimates of top and bottom lines have been easily surpassed.

But while earnings season has mostly been the equivalent of a layup for major technology companies, there are a few outliers. On Thursday, hidden among great reports for Microsoft, Alphabet, and Amazon, streaming-music service Pandora ( P ) reported a poorly received quarter, and saw shares punished to the tune of 33% as of the time of this writing.

As for the top line, Pandora reported a narrow miss with its haul of $311.6 million, short of the $312 million estimates. On the other hand, its bottom line reported a large miss of $0.40 on a generally accepted accounting principles (GAAP) basis, mostly due to a legal settlement adding to expenses. On a non-GAAP basis, excluding both the legal settlement and stock-based compensation, the company reported a gain of $0.10 per share, beating last year's result by $0.01.

However, none of those metrics mattered to nervous investors, because the company tipped its hand that Apple ( AAPL -1.17% ) Music may hurt future returns.

What did Pandora say on the conference call?

During the conference call, CEO Brian McAndrews attempted to put a happy face on the results. Noting this was a "unique quarter," McAndrews noted Apple Music's new entrance provided a "short-term" impact to this quarter's results, which showed slowing growth among monthly active users and total listener hours, while comparing it to the launch of Apple's radio service in 2013.

While it should be noted that the company grew revenue 30% on a year-on-year basis, the company provided extremely light guidance in its fourth fiscal quarter, offering $325 million-$330 million as opposed to that $351.8 million that analysts expected. Even worse for Pandora, this guidance is only 22% higher than last year's corresponding quarter haul of $268 million, indicating slowing growth in a seasonally heavy quarter for Pandora's ad-based business model.

The question is, is McAndrews correct that this is a one-off quarter in terms of Apple's effects on his company, or will Apple Music continue to impact Pandora's results?

Apple Music is doing well and changing the industry
Perhaps the best way to answer this question exists in a direct comparison between the two, as in subscription-based revenue. Apple CEO Tim Cook recently stated that Apple Music has 6.5 million paying customers. Using back-of-the-envelope math, and assuming that all have the lower-tier individual plans, Apple is on a run-rate pace to book $195 million in subscription-based revenues in its first full quarter of Apple Music billing.

Pandora, with its first-mover advantage, was only able to book $57 million in subscription-based revenue this quarter. Of course, this isn't an exact comparison, as Pandora mostly operates an ad-based model, but it does display the pricing power and brand affinity Apple enjoys over Pandora. But even Pandora's ad-based business is under threat from Apple's growth.

That's because streaming music is considerably a mutually exclusive construct. Either you're enjoying Apple Music, a service you pay for, or Pandora, but not both. If Apple continues to execute with its steaming-music service, look for a tougher path forward for Pandora.