It can be hard to value a company at its inflection point.

What: Pacific Biosciences of California (PACB -10.74%) jumped 9.6% on Friday after releasing earnings on Thursday night, and then proceeded to give back the entire gain and then some on Monday. Things have calmed down today. 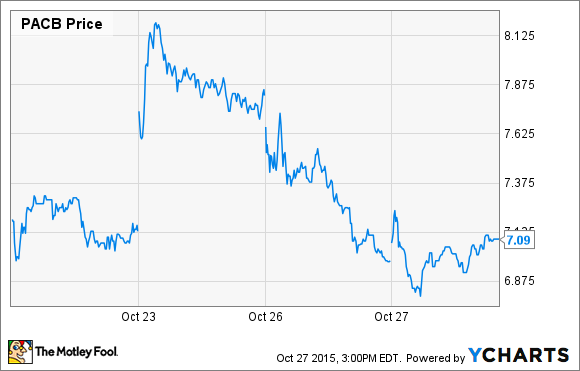 So what: Welcome to owning companies that are hard to value.

Pacific Biosciences is clearly worth more having launched its new DNA sequencing Sequel System than it was pre-launch. At a cheaper price than the older RS II system, Pacific Biosciences should be able to take some of Illumina's (ILMN -3.02%) market share. The RS II was really limited to applications that couldn't be performed on Illumina's machines because it was so much more expensive.

The other unknown comes from Pacific Biosciences' deal with Roche. Again, having the Sequel System that Roche will use as a basis for developing diagnostic tests makes Pacific Biosciences more valuable than without the system, but it's hard to estimate how many additional sales could come from the deal.

Part of the decline on Monday might come from investors worrying about the potential for a secondary offering that would dilute current shareholders. Pacific Biosciences ended the quarter with about $59 million, having burned through just under $14 million in the third quarter.

The company expects a $20 million payment from Roche in the fourth quarter, so it's certainly not under pressure to raise capital before the end of the year. But there's an adage that non-profitable companies should raise when they can, not when they have to. With shares up more than 75% over the last month, it would be hard to blame management if it raised here.

Now what: Investors would be best off ignoring the daily movements from Pacific Biosciences. We'll get an early idea of demand for the Sequel Systems when the company reports fourth quarter earnings, but we won't really know how much the systems are being used until they're in place and we see sales of consumables used by the machines in future quarters. The Roche story is even longer-term with a launch for clinical research scheduled for the second half of next year.

Brian Orelli has no position in any stocks mentioned. The Motley Fool recommends Illumina and Pacific Biosciences of California. Try any of our Foolish newsletter services free for 30 days. We Fools may not all hold the same opinions, but we all believe that considering a diverse range of insights makes us better investors. The Motley Fool has a disclosure policy.