What: Investors in Rite Aid (NYSE:RAD) are having a pleasant day -- shares of the pharmacy giant have jumped by more than 40% in afternoon trading after a news report broke by the Wall Street Journal claiming that rival pharmacy Walgreens Boots Alliance (NASDAQ:WBA) is in late stage talks to acquire the firm.

So what: The report claims that Walgreens is in advanced talks to buy Rite Aid at a potential $10 billion valuation. If true, that would value Rite Aid at about $9.53 per share, which would represent a healthy premium to yesterday's closing price of $6.08.

If confirmed, this would deal would combine the second and third largest pharmacy chains in the U.S. and give the combined company massive scale. Walgreens Boots Alliance boasts a global footprint of 13,200 stores, with the majority of those based in the states. Adding Rite Aid to the mix would add another 4,561 locations, which would put the combined operation well ahead of the currently leading pharmacy chain, CVS Health (NYSE:CVS), in terms of store count.

The report claims that deal is set to be formally announced on Wednesday.

Now what: Rite Aid shares have been sold off over the last month after the company reported earnings results that disappointed investors, leading it to lower its profit guidance for the full year. 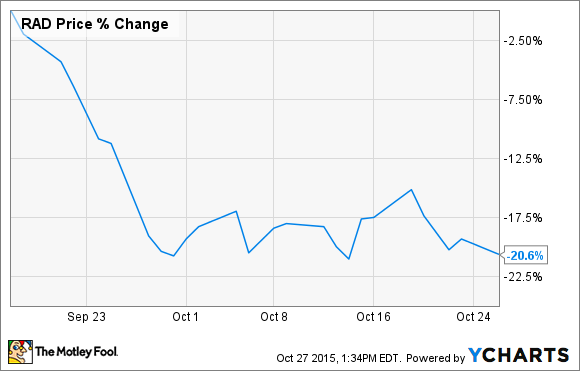 Given the discount on the company's shares, if Walgreens really is interested in making an offer it certainly appears to be a good time to do so. Of course, if this news story is confirmed there are still plenty of antitrust questions that would need to be answered before regulators would give the deal a green light.

At this point neither company has released any information that confirms or denies the buyout, but investors won't have to wait long to get answers; Walgreens is set to report its earnings tomorrow. You can bet this topic will come up on the call, so until then investors in both companies should probably just sit tight.