With higher than average crack spreads this past quarter, CVR Refining might be able to beat Wall Street earnings expectations.

Refining has been a pretty decent business to be in since oil prices started to decline. Companies in the space have been enjoying some of the best market conditions in a few years, which has been crucial for independent refiner CVR Refining (CVRR). Last quarter, the company blew by Wall Street's earnings expectations, and based on what analysts have predicted for this quarter, the company has a shot surprising us again.

By the numbers
CVR Refining and other independent refiners have had a pretty good run lately. The company has all of its refining assets in the mid-continent region of the U.S., which gives it the ability to source crude oil from the region at discounts to benchmark prices, which has led to higher than expected profits and surging stock prices this year. 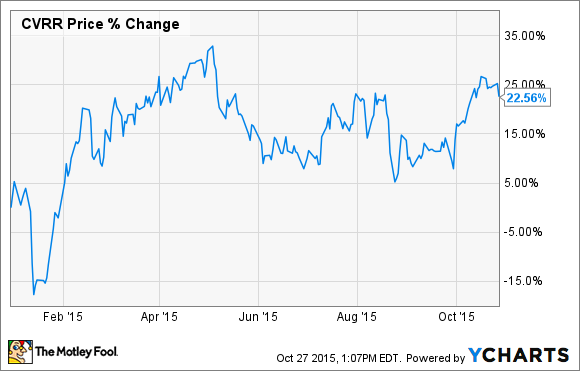 This coming quarter, consensus estimates compiled by S&P Capital IQ expect CVR Refining to post normalized earnings per share of $1.16. That would be a considerable improvement over last year's $0.63 per share, but keep in mind that oil prices were much higher in the third quarter of 2014. For refiners, this means higher costs of goods sold. Compared to last quarter's EPS of $1.44, though, expectations for this quarter seem almost tame.

What's working in its favor
One possible reason CVR Refining could outpace Wall Street's expectations is that refining margin indicators have remained extremely strong throughout the quarter. According to analyst group Howard Weil, the crack spread for the mid-continent region -- a rough index of gross margins for refiners -- was $22.29 per barrel of refined products. This is the highest crack spread in the past 12 months. What this means is that we can expect every barrel of refined products CVR Refining sells to have a pretty strong gross profit margin.

What's working against it
The one thing you need to keep in mind is that CVR did have some down time with its refining operations during the quarter. Aside from the planned maintenance of its Coffeyville refinery that started in late September, there was also some unplanned downtime in the quarter related to a two-week outage of one of its pieces of equipment.

During the company's last quarterly conference call, CEO John Lipinski stated that total refining throughput for the quarter should be between 175,000 to 190,000 barrels per day, well short of the 210,000 barrels per day it processed in the second quarter. The decline in earnings will likely be a little more than the decline in throughput, though, because refiners have lots of fixed costs that don't necessarily decline with throughput rates.

What a Fool believes
The reduced throughput rates will mean the chance to match last quarter's earnings blowout are slim. However, high crack spreads this quarter might be enough for CVR Refining to beat Wall Street's expectations yet again this quarter.

For those watching the results, two things to keep track of are throughput rates and any guidance the company may give on its other planned down time for its Coffeyville refinery over the next several quarters. CVR Refining will report earnings on October 29th before the market opens and will host a conference call to discuss the results at 1:00 p.m. ET.