Which of these healthcare REITs is best for your portfolio?

Real estate investment trusts, or REITs, can be an excellent way to get both growth and income in your portfolio. You can find REITs that specialize in virtually any type of property you can imagine, and one property type with exceptional potential over the coming decades is healthcare real estate. Let's take a look at two excellent, but different, healthcare REITs: HCP (PEAK 2.59%) and Physicians Realty Trust (DOC 1.28%).

About the contenders
HCP is one of the largest and longest-running REITs in the market. The company has a portfolio of approximately 1,200 properties, which mostly consist of senior housing and post-acute-care facilities. Not only does HCP have a massive portfolio that stretches over most of the United States, but the company became the first healthcare REIT to expand into the U.K. in 2012, so its properties are geographically diverse.

On the other hand, Physicians Realty Trust is a rather new REIT, having been in existence for just more than two years. The company is about one-tenth the size of HCP, with just 122 properties, 81% of which are medical office buildings (by NOI). Physicians Realty Trust derives most of its revenue from some of the most lucrative types of physician practices, such as orthopedics, surgery, and family practice. In fact, 68% of the company's revenue comes from five of the six highest-revenue practice types.

Before we dive deeper into a comparison of these two companies, let's take a look at why healthcare real estate is an attractive investment, in general.

Why healthcare?
There are a few great reasons to invest in healthcare real estate for the long term, and by far, the most compelling is the favorable demographics. According to the U.S. Census Bureau, the over-65 population is expected to grow by more than 140%, with even faster growth in the older age brackets. 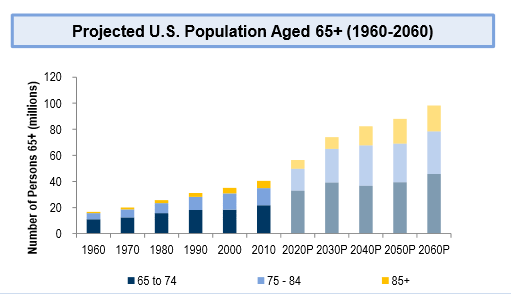 As a result of this and other factors, such as greater availability of affordable care, as well as the growing U.S. population, healthcare spending is expected to soar in the coming years. In fact, in the 10-year period from 2013 to 2023, U.S. healthcare expenditures are projected to grow by 78%. 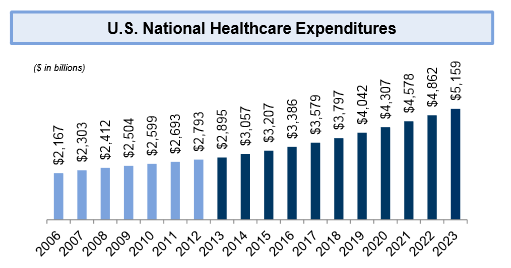 Finally, the healthcare market is a good place for REITs to operate because of its fragmented nature. Healthcare real estate represents a $1 trillion market in the U.S., and just 17% of this is owned by public REITs. This means that there is plenty of opportunity for the larger, established players to take advantage of acquisition opportunities going forward, in addition to the development opportunities created by the growing need for healthcare.

Growth strategies
The two companies we're looking at have rather different growth strategies. First, HCP's main strategy is to grow through development, believing that is the best way to achieve attractive, risk-adjusted returns on the scale they need. Plus, HCP has excellent relationships with some of the best facilities operators in the business, such as Brookdale Senior Living and HCR ManorCare. When HCP does make acquisitions, it tends to do so in bulk -- such as the recently announced $849 million acquisition of a senior housing portfolio from Chartwell.

In contrast, Physicians Realty Trust prefers to acquire existing properties, leveraging its relationships with physicians and hospitals to target off-market and lightly marketed assets. Although the company has been extremely active with acquisitions -- it plans on $700 million-$900 million this year -- its target deal size is small -- between $10 million and $50 million, which creates minimal competition from larger REITs like HCP.

Performance history and dividends
As far as performance history goes, HCP is the clear winner for obvious reasons. The company went public in 1985, and has delivered stunning returns to its shareholders, averaging 15.6% per year. In addition, HCP has increased its dividend every single year, no matter what the market was doing. Because of this outstanding record, HCP is actually the only REIT in the S&P 500 dividend aristocrats index.

To put HCP's incredible returns in perspective, consider that a $10,000 investment at HCP's IPO would be worth about $386,000 today, assuming all dividends were reinvested. Meanwhile, $10,000 invested in an S&P index fund would have grown to $132,000 during the same time period. 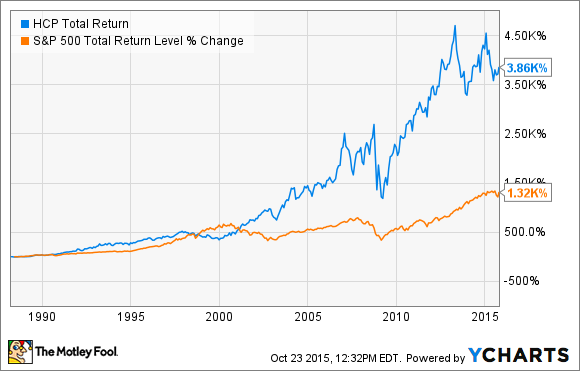 Although it's new, Physicians Realty Trust is already showing promise as a long-term winner. In just more than two years as a public company, it has delivered a 50% total return, handily beating the major REIT indices. 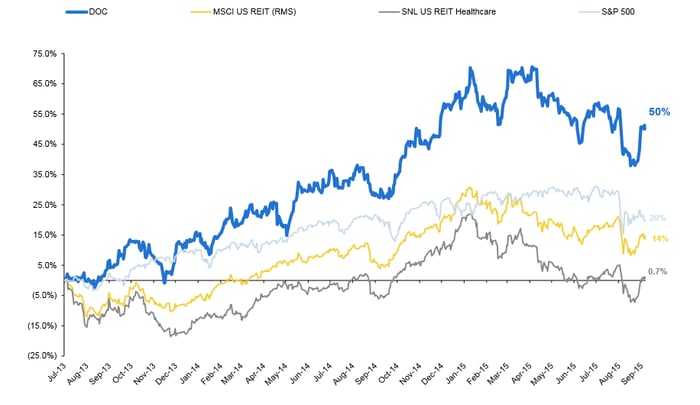 Both companies pay rather high dividend yields -- 5.74% for HCP, and 5.5% for Physicians Realty Trust. So, not only do shareholders get a nice income stream, but there's the potential for that income to rise dramatically over time.

Valuation
When valuing equity REITs, it's important to focus on funds from operations (FFO) as opposed to EPS, which doesn't provide an accurate picture of the money these companies actually make. Adjusted FFO, or AFFO, is an even more accurate measure of a REIT's ability to pay dividends, because it accounts for one-time charges among other factors; but the calculation of this metric isn't universal, so we'll focus on FFO for an apples-to-apples comparison.

HCP expects FFO between $1.97 and $2.03 for 2015, so using the midpoint of this range, along with the current share price, gives us a P/FFO ratio of 19.7. Physicans Realty Trust didn't provide full-year guidance in its latest quarterly report, but using its quarterly FFO of $0.18, we're looking at an annualized P/FFO of 22.7.

A few thoughts about these valuations. First, both of these may seem like rather high multiples to pay for income stocks, and ordinarily you'd be right. However, REITs like these are capable of producing consistent, market-beating returns, and are worthy of a premium valuation. In HCP's case, I actually feel that 19.7 times FFO is a low price to pay for a company with 15.6% average returns.

As far as comparing the two valuations goes, I'm inclined to believe that the more lofty valuation of Physicians Realty Trust is reflective of its up-and-comer status, rapid growth, and unique acquisition strategy. In other words, the company has tremendous (but unproven) potential for growth -- similar to HCP in the years just after its IPO.

In short, I think that both of these companies are attractively valued when considering their performance potential; but the difference in their age and business strategies make a direct comparison difficult.

The Foolish bottom line
As you can see, despite the fact that they both own healthcare properties, these are two completely different companies. On one hand, Physicians Realty Trust is a promising up-and-comer with a unique acquisition strategy that's already showing signs of success. However, HCP has proven over time that it can deliver market-beating performance.