Any investor in Marathon Petroleum (NYSE:MPC) can attest that this has been a good year to be a refiner. The decline in crude prices and significantly reduced feedstock have helped Marathon and its large independent peers Valero Energy (NYSE:VLO) and Phillips 66 outpace the S&P 500 by a wide margin. 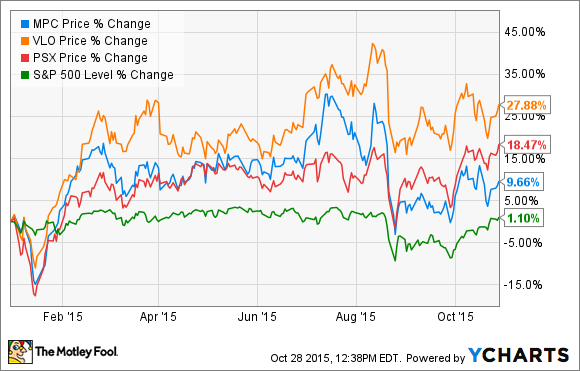 This recent performance has led to some pretty high hopes, though. Analysts expect Marathon to post its highest per-share profits since it went public back in 2011. Let's take a quick look at what Marathon will need to do to meet those expectations

According to consensus estimates compiled by S&P Capital IQ, Wall Street expects Marathon to post normalized earnings per share of $1.81 on revenues of $21.2 billion. This would be a 50% improvement in EPS compared to the same time last year. Meeting these goals will be pretty difficult, though, because management has already stated that the company expects refinery throughput to be slightly lower this quarter due to some planned downtime for maintenance at some of its facilities.

Increased income from its retail segment, and cash distributions from its ownership of pipeline master limited partnership MPLX (NYSE:MPLX), could help make up some of the difference. MPLX expects to increase its quarterly distribution at a 25% compounded annual rate through 2017. Marathon holds close to 70% of the shares outstanding in MPLX, and also receives incentive distribution rights, so those increases will lead to a pretty decent chunk of cash each quarter in the coming years.

The big picture
Marathon has been very kind to shareholders. Not only did the company increase its dividend by 28%, to $1.28 annually last quarter, but it also authorized the repurchase of $2 billion in stock between now and 2017. At today's share price, that would equate to about 7% of shares outstanding. As nice as that sounds, it does seem like an odd time to buy back large chunks of stock.

Shares are trading at close to their all-time highs, and the environment for refining is extremely favorable right now. If oil prices were to rebound, Marathon's prospects might look as strong as they do today, and holding off until then to repurchase shares might garner the company a better return on that cash.

From an operational standpoint, though, the big focus right now is on MPLX and its integration of MarkWest Energy Partners (NYSE: MWE). Marathon estimates that it has about $1.8 billion in assets it can drop down into MPLX, and the addition of MarkWest's large backlog of organic growth projects should provide plenty of investment opportunities to grow cash payments to Marathon.

What a Fool Believes
It wouldn't be a shock if Marathon Petroleum misses Wall Street's estimates this quarter. The favorable refining environment and increased cash payments from MPLX and retail segments probably won't be enough to make up for the maintenance downtime at its refineries. Just because it doesn't meet those lofty expectations doesn't mean that Marathon is in trouble, though.

It's pretty clear that the company is generating tons of cash, and has plenty of places to invest it, or give it back to shareholders. Marathon reports third-quarter earnings on October 29th before the market opens, and will host a conference call on the same day to discuss the results at 10:00 am ET.