3D Systems (NYSE:DDD) surprised investors on Thursday morning with an announcement that its CEO of 12 years, Avi Reichental, is no longer with the company. According to the press release, Reichental's last day was Wednesday, and the resignation was mutual between him and board. 3D Systems shares were off over 5% at the time of this writing, perhaps because the announcement came days before the company's third-quarter results, due out on the morning of Nov. 4.

In response to Reichental's exit, 3D Systems' board has a set up an "executive management committee" to provide ongoing leadership, and support of its operations and strategic initiatives, until a replacement is found. 3D Systems' Co-founder Chuck Hull heads the committee, while Chief Legal Officer Andrew Johnson will serve as interim CEO and president. COO Mark Wright and CFO David Styka are also serving on the committee.

Although Reichental's abrupt departure casts a cloud of uncertainty over 3D Systems' future, it could ultimately prove to be a positive development for investors because it allows the board to find a capable replacement who can fix the numerous issues that has plagued the company in recent years.

A long time coming
In hindsight, the writing has been on the wall for Reichental to resign. Under his tenure, 3D Systems adopted a hyperaggressive acquisition strategy to pursue market opportunities. It resulted in the company making approximately 50 acquisitions over the last four years, which, in turn, led to a host of execution issues that weighed on its operations, performance, and stock price. 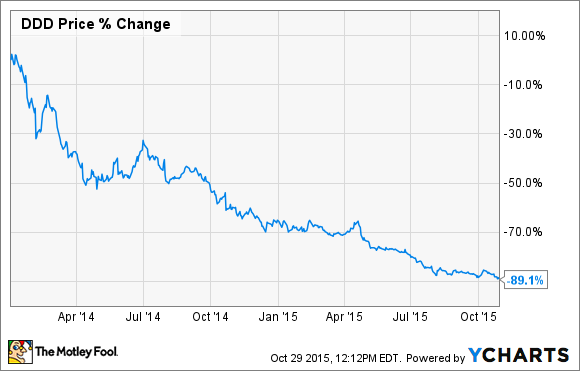 For instance, 3D Systems' cash conversion cycle, which measures the number of days it takes for cash to run through the entire sales process -- from sitting in the bank, buying inventory, selling inventory, and collecting payment -- has been steadily on the rise over the last four years. Ideally, investors want to see a company's cash conversion cycle decreasing over time, because it means collected cash can be reinvested back into the business more quickly and indicates that management is focused on operational efficiency.

Clearly, 3D Systems' acquisition strategy has come at the expense of its operational efficiency: 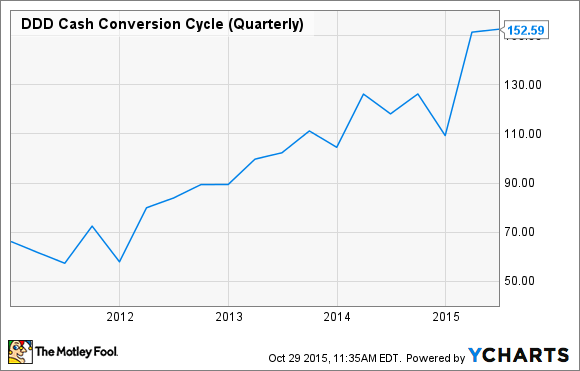 Internally, Reichental's leadership style didn't seem to resonate well with employees, at least according to employer review site, Glassdoor. Based on some reviews, Reichental's low approval rating may have been influenced by the likely friction created from meshing many company cultures from its acquisitions into a single company culture.

A tall order to fill
With 3D Systems' stock off nearly 90% since the start of 2014 and Reichental no longer serving as CEO, the executive management committee has a big job ahead: It has to find a CEO who's up for a challenge, willing to join a company plagued with execution and performance issues, and capable of enacting big changes. It's a tall order, but necessary to get the company back on track to creating long-term value for shareholders.

In the meantime, the executive management committee has an opportunity to show investors how serious the company is about improving its results and finding the right replacement. Fortunately, investors won't have to wait long to get a better sense of the committee's seriousness, as it'll be hosting a conference call to discuss third-quarter results on Nov. 4 at 8:30 a.m. ET.