Please ensure Javascript is enabled for purposes of website accessibility
Free Article Join Over 1 Million Premium Members And Get More In-Depth Stock Guidance and Research
By Brian Stoffel - Oct 31, 2015 at 6:40AM

The entire country averages about $53,000, but there are significant differences by region.

These lights could be used as a proxy for economic activity across America. Photo: NASA, via Flickr.

Everyone knows that the cost of living -- and the salary a worker can demand -- varies by region of the United States. But how much does it vary? And how do you compare to the average within your own region?

The Census Bureau provides some clarity on the problem. Every year, the organization releases information on household income by region. It has divided the country into four sections: Northeast, Midwest, West, and South. 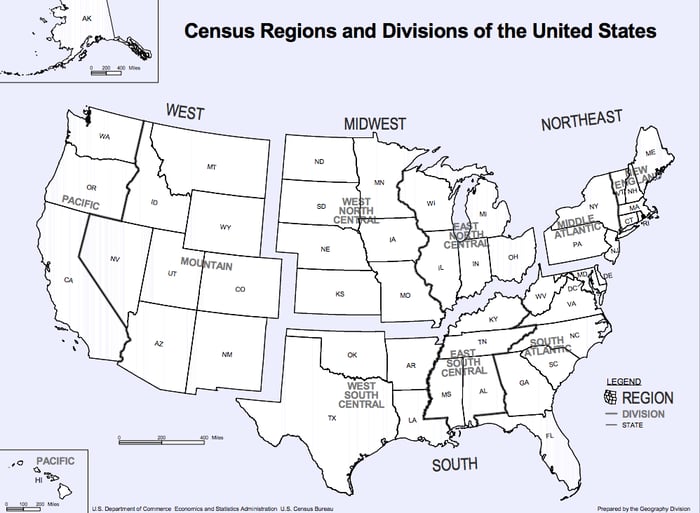 After finding your own region of the country, simply take your household's yearly pre-tax income and compare it to the median income in each region for 2014 to see where you compare.

While these might look like small differences, they aren't. When averaged -- as a median -- across millions of people, these are significant differences in income. How does your household's income compare?

Interested to see how income has changed over time, I dug into the Census Bureau's archives to find the answer. Going back to 1979 -- household income was measured differently before then -- I happened upon a few interesting facts. 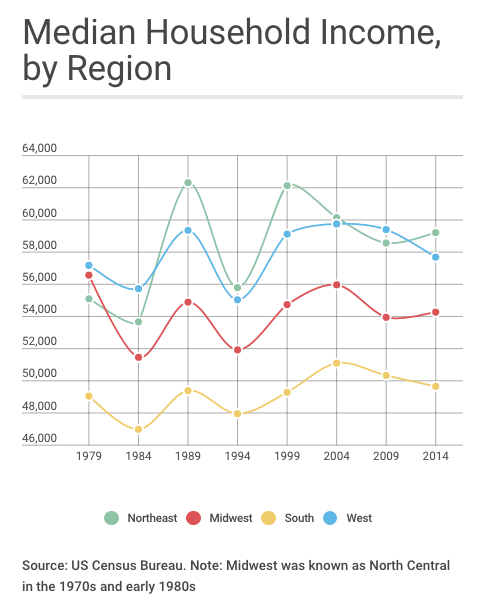 For one, real income has barely changed in the past 35 years. Second, we can see the effect of the manufacturing jobs in places like Cleveland, Detroit, and Milwaukee moving overseas. It's surprising to see that, in 1979, the median income in the Midwest was actually higher than the Northeast. But once those jobs left, that was no longer the case -- and it hasn't been ever since.

Regional differences in a modern world
But perhaps the most interesting takeaway for the adventurous Fool is this: never before has America's workforce been so mobile. By that, I don't mean the ability to up and move on a moment's notice. Instead, I mean that a growing percentage of workers are able to complete their jobs remotely.

This presents the opportunity for arbitrage -- or taking advantage of differences in costs of living. For example, I contract for The Motley Fool, a company located just outside of Washington, D.C. Were I to live in the Washington, D.C. area my income wouldn't go nearly as far as it does in my current hometown in rural Wisconsin. But because I live where I do, my family and I are in a much more comfortable and secure financial situation.

Is this a possibility for everyone today? Hardly. But the proportion of workers -- or contractors and freelancers -- who are able to complete their work remotely is a trend that shows no signs of slowing down. Global Workplace Analytics estimates that between 2005 and 2014, the number of teleworking employees grew by 102%.

Maybe, eventually, those region differences will disappear by dint of people living in one place and officially working for a company in a different region of the country.