When Biogen (NASDAQ: BIIB) reported third-quarter results recently, it announced some serious operational changes to come. An 11% workforce reduction following a sales deceleration and a stock-price plunge smacks of desperation. If that's the case though, why did the stock rise 4% on the day of the announcement? 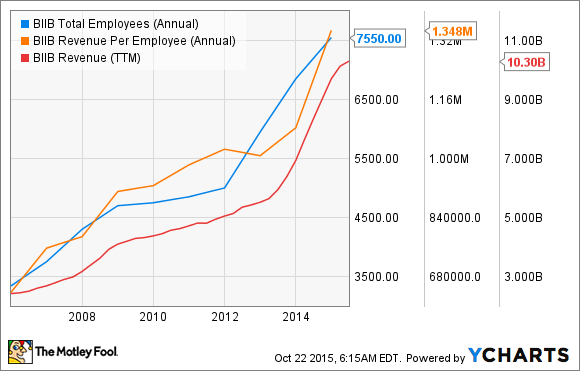 Strong top- and bottom-line growth along with raised guidance for the year helped, but to understand why the market favored the restructuring announcement, we need to look at the past several years. Leading up to and following the launch of multiple sclerosis drug Tecfidera in March 2013, Biogen added employees at a blazing pace. The company began 2012 with an employee headcount of 5,000 that quickly swelled to about 8,000 just ahead of the cuts.

The slowdown in Tecfidera sales has been abrupt as the drug's safety profile has been called into question, and growth estimates for the company as a whole have fallen hard. Management went from expecting top-line growth of about 15% at the beginning of the year to between 8% and 9% when the company reported earlier this month. The new growth estimates aren't awful, but you can quickly see the need to make adjustments.

The cuts
Management expects its restructuring efforts will lower operating costs by about $250 million annually. Reduced labor expenses are likely a big part of that expected savings, but employees aren't all we'll be seeing less of at Biogen.

Also on the chopping block are a handful of clinical-stage programs deemed less likely to succeed, the most notable of which is the phase 3 Inspire study with Tecfidera. This trial began recruiting over the summer and would have involved 1,170 secondary progressive multiple sclerosis (SPMS) patients over several years. It's not uncommon for trials of this size and duration to cost their sponsors $1 billion or more.

When odds of success seem good, this is an easily justifiable expense, but SPMS is a tough nut to crack. These are patients whose disease began as relapsing remitting MS and then began resembling primary progressive MS. As with PPMS, there is a dearth of approved disease-modifying SPMS therapies, although not for lack of trying. Given the odds, ending this program makes perfect sense.

The investments
Even with these cuts, this will be an expensive few years for Biogen. At the top of the company's list of pricey investments is the resurgence of the direct-to-consumer television ads seen during Tecfidera's launch.

While advertising might help restore growth of Tecfidera sales in the U.S., it's the investment into mid- and late-stage clinical studies that will provide returns over the long term. Biogen has no shortage of opportunities in this department, although its Alzheimer's candidate aducanumab may be its most exciting prospect.

With big opportunities come big expenses, however. Two identical phase 3 aducanumab trials have started enrolling the first set of what will eventually total a combined 2,700 patients. If all goes well during interim analyses, data collection will continue through 2020, with study completion expected two years later. Monitoring thousands of patients with dementia, in dozens of locations around the globe over several years is an enormous undertaking. Biotechs are extremely cagey about their R&D spending details, but generally a trial this size will cost well over $1 billion.

As expensive as this seems, it pales in comparison to what an approval for aducanumab would mean for Biogen. The Alzheimer's Association states spending on Alzheimer's and other dementias will cost the US $226 billion this year. It's impossible to say how much a drug that effectively slowed progression of the disease would bring in, but even a sliver of that figure would have a huge impact on investors.

Early next year, Biogen also expects to begin a phase 3 trial with recently-acquired MT-1303. This is an S1P modulator, in the same class as Gilenya from Novartis and Ozanimod from Celgene. Like its cousins, MT-1303 shows potential in a number of autoimmune disorders, with one important difference. Phase 2 results suggest it isn't associated with unwanted decreases in heart rate when patients receive their first doses, which could help it break into markets already served by other drugs of the same class. The acquisition isn't quite finished, but if all goes according to plan, this compound should enter a phase 3 trial in inflammatory bowel disease beginning next year.

Inflammatory bowel disease is typically treated with injected biologics that are often poorly tolerated, leaving thousands of patients with unmet need. An effective oral option in this space would likely reach blockbuster status.

Slightly behind MT-1303 and aducanumab is a unique multiple sclerosis candidate, Anti-LINGO. Drugs like Tecfidera slow down progression of the disease, but Biogen's Anti-LINGO looks like it can actually reverse the damage. A successful phase 2 trial in acute optic neuritis suggests it does a great job of protecting neurons from damage, but we don't have much insight into its multiple sclerosis potential yet.

The company expects results from a 419-patient phase 2 trial with Anti-LINGO and multiple sclerosis patients about halfway through next year. If the results are consistent with the optic neuritis trial, we can expect another large and expensive phase 3 trial in Biogen's near future.

A heavy load
During the first nine months of this year, Biogen spent almost $1.47 billion on R&D.  That's more than the $1.44 billion spent on R&D during all of 2013. Even though I think these programs may be the most exciting and immediate prospects for the company, the list could go on and on. Next year the company will have four compounds in phase 3 trials, and Anti-LINGO could make five.

Normally, announcements of "restructuring" can be read as "responding to big trouble." Sure, safety concerns have dampened Tecfidera sales. Going forward, Roche's ocrelizumab might further pressure the company's MS franchise, even though Biogen is entitled to significant royalties from potential sales of the experimental therapy.

In the end, I would view the restructuring as a means of advancing its robust pipeline more than a sign of trouble. Biogen wasn't specific about whether it was cutting pipette jockeys or sales staff, but one thing is sure. By running four or five large phase 3 trials at the same time, it will be paying a lot more to physicians, statisticians, and independent safety monitors in the years ahead. Having so many opportunities that you need to heavily prioritize is a good problem to have.