GoPro (NASDAQ:GPRO) stock has crashed to new lows in recent days, after the company's Q3 earnings report and Q4 outlook were significantly worse than feared. In just a few short months, GoPro has turned from a market darling into one of the most hated stocks out there. 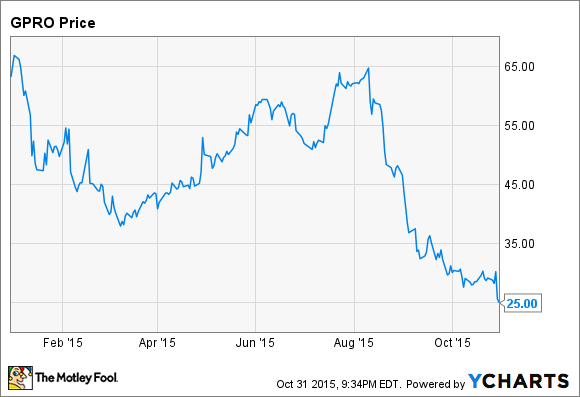 GoPro's problems can primarily be traced to management's miscalculation about the potential popularity of the ultra-compact HERO4 Session camera. The problem was compounded by a price that was too high and insufficient marketing support. However, I doubt this will cause long-term damage to GoPro's brand. As new products arrive in 2016, I expect earnings to skyrocket and the stock to bounce back.

GoPro misses the mark
GoPro produced adjusted earnings per share of $0.25 on revenue of $400 million last quarter. That was up significantly from EPS of $0.12 and revenue of $280 million a year earlier. However, it fell well short of GoPro's guidance for revenue of $430 million-$445 million and EPS of $0.29-$0.32. This was the first time that GoPro has missed its guidance since its IPO.

It's possible that after the company's poor Q3 results, it issued an ultra-conservative forecast to avoid another earnings miss. Even so, it seems almost certain that both sales and earnings will decline year over year this quarter. Is the GoPro growth story over?

Growth is hard with old products
What GoPro bears appear to be forgetting is that product cycles have a huge impact on GoPro's results. Last year, GoPro announced the top-of-the-line HERO4 Black and HERO4 Silver cameras on Sept. 29, with an on-sale date of Oct. 5.

The massive popularity of these two products has driven huge sales gains at GoPro. The new HERO4 devices began to ship at the very end of Q3 2014, driving 46% revenue growth that quarter.

Growth then accelerated in the fourth quarter, with revenue up 75% year over year. Through the first three quarters of 2015, GoPro's revenue is up 56% year over year -- even with Q3 having missed expectations by a wide margin. Thus, for the full year following the HERO4 launch, GoPro posted mid-double-digit revenue growth.

GoPro isn't launching a new high-end camera this year. That means it's going to be selling essentially the same products in Q4 2015 as it was in Q4 2014. (GoPro has added several new mid-range cameras in the intervening year, but the high-end Black and Silver product lines have always driven the bulk of its sales.)

This situation makes GoPro's guidance look a lot more benign. The company may have blundered by not having new top-of-the-line models ready for the holiday season, but the next-generation GoPros should still drive a new wave of growth when they arrive. Indeed, GoPro's revenue growth had decelerated to 11% in the first half of 2014 (including a year-over-year decline in the first quarter of that year) before bouncing back thanks to the HERO4 launch.

New products are coming
In the past few days since GoPro released its earnings report and guidance, analysts have been busy slashing not only their Q4 revenue and earnings estimates but also their 2016 expectations.

This is fairly standard procedure after bad earnings reports. But it might not reflect reality in this case. GoPro will certainly have a new set of high-end action cameras ready in 2016. That could drive a big wave of upgrade demand.

In addition, GoPro is on track to start selling its first quadcopter drone in the first half of 2016. CEO Nicholas Woodman has said that GoPro is focused on providing a much better user experience than today's consumer drones offer. GoPro will also release a six-camera rig for creating virtual-reality content during the first half of 2016.

In short, GoPro is likely to return to strong sales growth at some point next year -- the exact timing depends on when its next-generation high-end cameras come out. Its forays into new markets like drones, virtual reality, and media add incremental growth opportunities. By this time next year, I expect GoPro's current woes to be a distant memory.

GoPro, Inc. Has an Earnings Wipeout: Why I'm Not Worried @themotleyfool #stocks $GPRO Next Article
Current