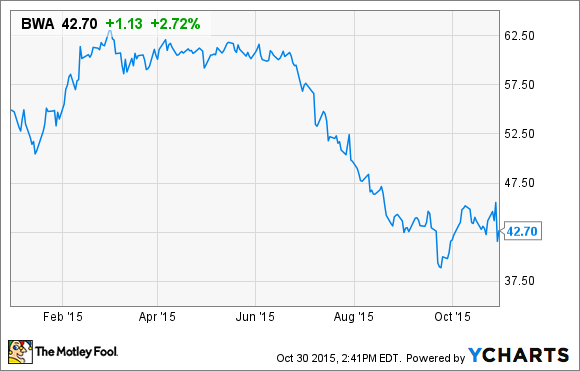 BorgWarner shares have had a rough time of it this year. And the future doesn't look so hot for Borg, either. BWA data by YCharts.

For two quarters running, automotive engines specialist BorgWarner (NYSE:BWA) has consistently failed to meet expectations on Wall Street. That ended last Thursday, when the company announced fiscal Q3 2015 earnings that handily trumped analyst estimates. Yet the stock fell 9% in response to earnings. Why?

From the perspective of profits, Borg actually did pretty well last quarter. Expected to report earnings per share of $0.70, Borg hit the nail on the head, delivering precisely $0.70 in GAAP earnings -- and $0.73 in pro forma profits (to which analyst estimates often refer). Granted, Borg's earnings were down about 4% from Q3 2014 levels. Granted, too, revenues at the company slumped 7%, to $1.9 billion.

Nonetheless, a beat is a beat, and ordinarily, you would have expected that to work out pretty well for Borg shareholders. The reason it didn't can be summed up in one word: guidance.

What Borg said
Tweaking full-year guidance to account for Q3 results, Borg told investors to expect full-year sales to decline 5% to 6% when all's said and done. The company's also targeting a pro forma operating profit margin of 13%, and pro forma profits per share of $2.95 to perhaps $3.

So in essence, Borg has reduced its guidance, and reduced it enough to spook investors about the possibility that the company will "miss earnings" for the third time in four quarters.

Reason to be spooked?
But should you be scared by BorgWarner's predictions? Well, as a matter of fact: Yes, you should be scared. Here's why:

"Thanks" to BorgWarner's post-earnings sell-off, the stock now sells for about $9.6 billion in market cap. Add $700 million or so in net debt, and the stock's enterprise value is $10.3 billion.

Weighed against this enterprise value, BorgWarner's $624 million in GAAP net profits works out to a modest-seeming 16.5 multiple. That's only a bit more expensive than the 15.3 P/E ratio you see reflected on Yahoo! Finance.

If you think that's reasonable for a stock that, according to analysts polled on S&P Capital IQ, is expected to grow its profits at nearly 14% annually over the next five years -- watch out, because BorgWarner may not be nearly as reasonably priced as it appears.

Turns out, over the past 12 months, BorgWarner has generated just $142 million in positive free cash flow -- less than 23% of the "profit" it claims to be earning under GAAP accounting standards. This isn't exactly out of character for the company, which has historically produced pretty weak cash profits, relative to its GAAP numbers. But it nonetheless suggests that BorgWarner's GAAP numbers aren't nearly as strong as they seem. Valued on cash profits, BorgWarner shares sell for not 15.3 times free cash flow, or 16.5, either -- but an incredible 68 times FCF, or 72.5 with debt factored in.

This, suffice it to say, is a lot to make for an auto-parts manufacturer projected to grow in the low teens (and actually shrinking instead). Long story short, the investors who sold off BorgWarner shares last week were probably right to do so.