For much of its existence, DreamWorks Animation(NASDAQ:DWA) stock has climbed and fallen based on how the company's movies have performed at the box office.

DreamWorks Animation has worked to change that in recent years by expanding its television, streaming, and digital options to give it steadier, more predictable revenue. Continued success in doing so, which includes signing a major new deal, likely contributed to the company's strong October, when it gained 16% according to S&P Capital IQ data. 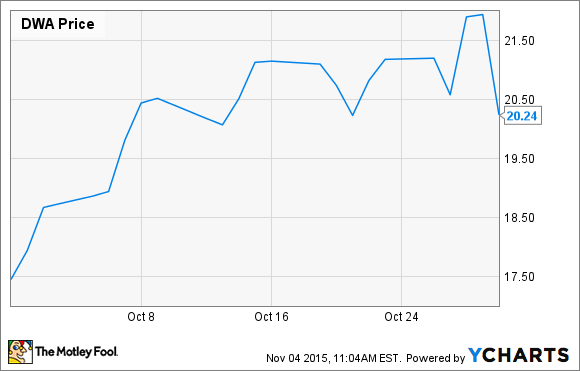 What: DreamWorks has been hit or miss at the box office for its entire existence, which has led the company to ramp up its other businesses. One of those efforts, AwesomenessTV, announced a major deal with global content creator, producer, and distributor Endemol Shine Group to enter "into a strategic partnership to extend the international reach of the AwesomenessTV brand", the company said

Under the multi-year deal, Endemol Shine Group's premium channel network (PCN) Endemol Beyond will launch local language, owned and operated AwesomenessTV channels in key markets outside the U.S., including the UK, France, Germany, Spain, and Brazil. The company will also "support and further grow the existing AwesomenessTV roster of talent led channels in these markets, as well as incubate new talent and verticals across the network."

So what: In its second quarter earnings release, DreamWorks CEO Jeffrey Katzenberg laid out its restructuring efforts, which include shifting its business to be less dependent on theatrical releases.

"Our second quarter financial results were solid, highlighted by the theatrical success of Home and the rapid expansion of our Television and New Media businesses," said Katzenberg. "The appetite for premium content across platforms continues to grow both domestically and internationally, and it's clear DreamWorks Animation is well-positioned to capitalize on the growing demand."

Now what: The company reports third quarter results on Nov. 5, and whether it can hold on to its October gains depends at least somewhat on if it managed to continue to grow its non-movie business. The Endemol deal, however, should help those goals long-term, making DreamWorks Animation stock less of a rollercoaster proposition based on how its latest film is performing.